Pope lays wreath in the Hall of Remembrance and greets six Holocaust survivors.

By SAM SOKOL
Pope lays wrreath at Yad Vashem
(photo credit: SAM SOKOL)
Advertisement
Speaking at the Yad Vashem Holocaust memorial and museum on Monday, Pope Francis compared the Holocaust to idolatry and expressed shame in “what man, created in [God’s] own image and likeness, was capable of doing.”Francis’ remarks came during his brief visit to the site, where he laid a wreath in the Hall of Remembrance and greeted six Holocaust survivors.Following the address, Yad Vashem chairman Avner Shalev presented the pope with a reproduction of a painting of a hassid engrossed in prayer that was painted in the Lodz ghetto by a teenage victim of the Shoah.Speaking in the presence of Prime Minister Binyamin Netanyahu, President Shimon Peres and Holocaust survivor Rabbi Yisrael Meir Lau – the former chief rabbi – Francis further beseeched God to “grant us the grace to be ashamed of what we men have done.” He added that the Nazi genocide was “massive idolatry” that must never happen again.In the gloom of the large hall, the massive stones and concrete of its construction looming above him, the pontiff looked small and frail, an old man dwarfed by the immensity of the issues of theodicy and divine justice inherent in an examination of the Holocaust. 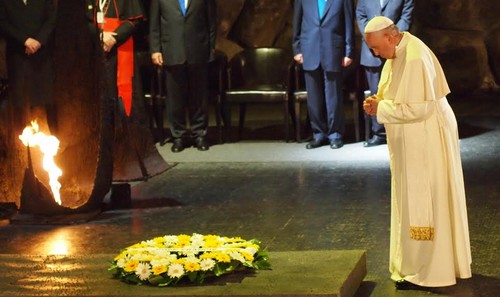 Standing illuminated by spotlights and the glow of the memorial flame he had lit only minutes before, Francis questioned the role of God in the slaughter.“The Father knew the risk of freedom, he knew that his children could be lost, yet perhaps not even the Father could imagine so great a fall, so profound an abyss,” he mourned.Addressing mankind collectively as the biblical Adam, the pontiff asked “who led you to presume that you are the master of good and evil?” “Who convinced you that you were God? Not only did you torture and kill your brothers and sisters, but you sacrificed them to yourself, because you made yourself a god. Today, in this place, we hear once more the voice of God: ‘Adam, where are you?’” “Hear Lord and have mercy,” Francis intoned. “We have sinned against you.You reign for ever.”After his remarks, the pope stood silent at the podium, contemplating, before stepping aside to hug Peres and shake Netanyahu’s hand.Francis continued the leitmotif of mortification in his comments in the Yad Vashem guest book.“With shame for what man, who was created in the image of God, was able to do; with shame for the fact that man made himself the owner of evil; with shame that man made himself into God and sacrificed his brothers.Never again!! Never again,” he wrote.After the visit, Yad Vashem issued a statement attributing “great importance and special significance to the visit of Pope Francis, which we hope will foster greater Holocaust awareness around the world.”The papal visit to Yad Vashem “has a very special meaning,” Adrian Werthein, a Jewish communal leader from the Pope’s native Argentina told the Jerusalem Post immediately prior to the ceremony.“[The pope] chose to come here to Yad Vashem to [show] recognition [for] the torch of memory of the Jewish people,” he said.