Biden in eulogy: Sharon had a ‘North Star’ to guide him

Video: Eli MandelbaumUS Vice President Joseph Biden said on Monday that Ariel Sharon had a “North Star” to guide him, from which he never deviated: the survival of the State of Israel and the Jewish people wherever they resided.“Because Sharon possessed such incredible physical and political courage, he never deviated from that interest,” Biden said at a memorial service for Sharon at the Knesset. “Even someone thousands of miles away from here could see, taste, feel it. There was no doubt about it.”Biden praised Sharon for deciding to evacuate Gaza even though it was a politically controversial move. Biden contrasted Sharon’s positions before and during his premiership, using a line from a Yehudit Ravitz song that Sharon famously quoted: “Things that you see from there, you can’t see here.”“When a country that has been tested as much as Israel loses someone like Sharon, its like a death in the family,” said Biden, who knew Sharon for 30 years. 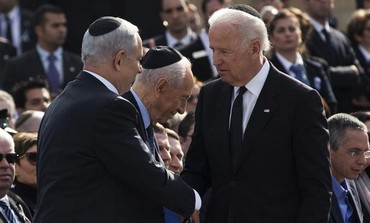 The vice president, who attended the memorial with Ambassador to Israel Dan Shapiro, Rep. Eliot Engel (D-NY), Rep. Debbie Wasserman Schultz (D-FLA) and former ambassador to Israel Daniel Kurtzer, recounted meeting Sharon, and in a possible reference to his girth said “he was not only a powerful man, but a powerfully built man... He had a powerful presence. He filled a room.”“When the topic of Israel’s security arose, which it always did in meetings with him, you understood how he got nicknamed ‘bulldozer,’” Biden added.The vice president also discussed the friendship between the US and Israel, which he said Sharon worked to deepen.“The arc of Sharon’s life traced the journey of the State of Israel. Through it all, the US has been unflagging in its commitment to Israel,” Biden stated.“We have never failed to defend Israel’s legitimacy and no one has any doubt as to where America stands. This is the ultimate refuge for Jews wherever they are around the world, and that will never change.”“May the bond between Israel and the US never be broken,” Biden concluded. 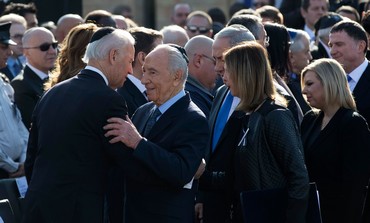 Quartet representative and former British prime minister Tony Blair’s speech at the ceremony focused on the changes in Sharon’s policies, calling the disengagement from Gaza, Sharon’s agreement to the Quartet’s Road Map for Peace and the formation of Kadima “actions no one thought he would take.”“The idea that Sharon went from man of war to man of peace misses what defined him. Actually, Sharon never changed,” Blair posited. “The state he fought for from age 14 had to be protected. When that meant fighting, he fought. When that meant peace, he sought peace.”According to Blair, “Sharon didn’t move, he charged. He could leave considerable debris in his wake, but his destination was clear.”The Quartet representative to the Middle East praised Sharon for “having the imagination to know peace is the anchor for Israel’s security.”Blair emphasized the contrasts in Sharon’s persona: “He was tough, but shy. Indomitable, yet a servant to his people. He was a warrior to help create his country, but wise enough to know war isn’t enough.”Other foreign dignitaries attending the memorial service at the Knesset included the Czech prime minister and defense minister, the foreign ministers of Australia and Germany, the Greek and Cypriot defense ministers, the speaker of the Russian Duma and ministers and deputy ministers from Italy, Bulgaria, UK, Holland, Singapore, the Philippines, France, Canada and Romania.
Advertisement
Subscribe for our daily newsletter