Video by Seth J. FrantzmanViolence broke out Thursday night near the Kalandia checkpoint, located in the West Bank between Jerusalem and Ramallah, as residents of the West Bank village clashed with police in protests against the IDF's operation in the Gaza Strip.Some 10,000 Palestinians protested near the checkpoint, throwing rocks, firebombs and fireworks at Israeli security forces, and setting tires ablaze. The IDF forces and Border Police were using crowd dispersal means on the masses. Hospital officials in Ramallah earlier said three protesters had been killed, but revised that to one killed and three others in critical condition and on life support. Some 200 protesters were injured, a hospital doctor said. Thirteen Israeli police officers were lightly injured.The IDF Spokesperson's Office did not immediately confirm the Palestinian casualties. The military was checking reports of live fire targeting Israeli forces at the checkpoint. The protest erupted after allies of Palestinian Authority President Mahmoud Abbas's Fatah movement marched from the West Bank city of Ramallah to the edges of Jerusalem in protest against Israel's 17-day-old campaign against Hamas militants in Gaza.By Friday morning Jerusalem Police said that 39 rioters had been arrested in the clashes overnight in Jerusalem, and that 27 police officers had been lightly hurt, including 10 Border Policemen and 200 Palestinians wounded. The officers who were injured had been attacked by stone-throwers and rioters wielding sticks, pipes, and shooting fireworks at police, the Jerusalem District spokesman said.  The injured officers were part of a force of around 4,000 police who had been deployed in East Jerusalem the Old City and the West Bank following what Jerusalem Police said Friday was prior intelligence they had accrued that there would be clashes on Thursday night as Muslims celebrated Laylat al-Qader, an important date in the month of Ramadan. Jerusalem Police said the violence inside the city started inside the alleyways of the Old City and from there spread to the Arab neighborhoods of East Jerusalem. Police credited their large deployment for containing the rioting in Arab neighborhoods, saying that otherwise it could have spilled over into the Jewish neighborhoods of west Jerusalem. 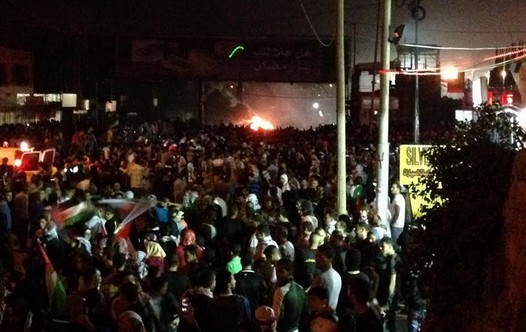 On Friday Jerusalem Police will again have between 3,000-4,000 officers deployed in the city, as riots are expected to break out following Friday prayers. They have also limited access to the Temple Mount to women and to Muslim men over the age of 50. On Thursday, Israel Police arrested nine suspects in east Jerusalem, for disrupting the peace and attacking police officers, near the Old City. The police said it used crowd dispersal methods to restore order. At the same time, near the Temple Mount, dozens of east Jerusalem residents threw rocks and Molotov cocktails at police forces. The police said said they have arrested 10 suspects, and that two police officers were lightly injured during the clash. As police prepared for Friday prayers, they planed to heighten security in the Old City and throughout Jerusalem, as Operation Protective Edge enters its third week, fueling already heightened tensions between Arabs and Jews in the capital.Citing anonymous threats of Arab rioting expected near Damascus Gate, National Police spokesman Micky Rosenfeld said Thursday that hundreds of officers will be on hand near the east Jerusalem entrance Friday to ensure no incidents take place.“Police are making preparations for the thousands of people expected to the Old City to pray during Ramadan,” he said. “We have received information that there will be disturbances, so we are leaving nothing to chance to ensure the safety of residents.”To that end, Rosenfeld said no Arabs under 50-years-old will be permitted to enter Damascus Gate, and undercover teams and various other elite units will blanket the area to respond immediately to any violence.Since the brutal revenge murder of Mohammed Abu Khedeir earlier this month, several communities in east Jerusalem, have been embroiled in rioting, resulting in dozens of arrests and the destruction of municipal property, including two light rail stations.As a result, last week Jerusalem Mayor Nir Barkat announced an unprecedented police aerial surveillance pilot program to monitor at-risk neighborhoods from the sky by utilizing unmanned aerial vehicles, which look like miniature helicopters.Noting the destruction the riots caused to light-rail stations in Shuafat and Beit Hanina neighborhoods, Barkat said it is imperative that police take all available measures to ensure residents’ safety.The helicopters are equipped with high definition and thermal imaging cameras for night, which transmit live footage to an area police precinct.Reuters contributed to this report.