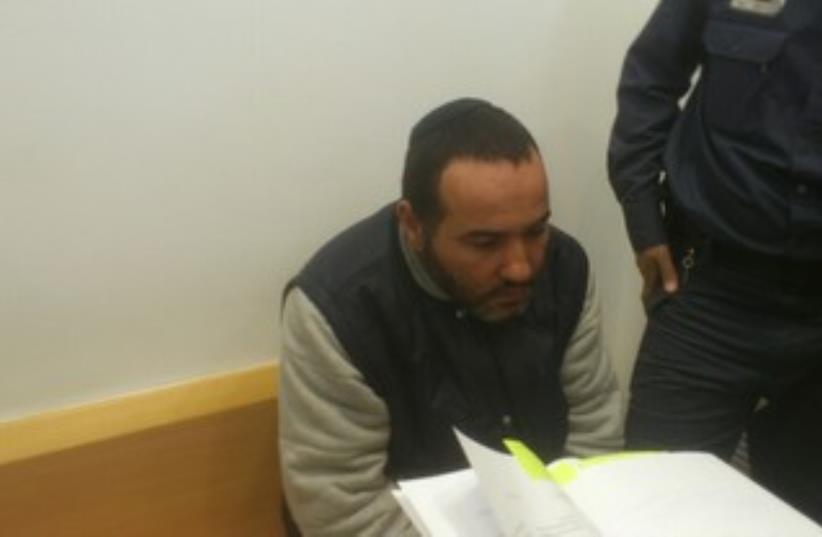 Mob boss Shalom Domrani in court 370
(photo credit: yonah jeremy bob)
Advertisement
A cache of hi-tech surveillance gear and a stash house at a moshav in southern Israel full of bombs and firearms were seized last week. The seizure took place in a series of raids against a crime family police say was plotting attacks on their sworn rival and his organization in the South.The crime family, whose name is still not cleared for publication, is known as one of the most bitter rival of mobster Shalom Domrani. The organization, which like Domrani’s is based in southern Israel, has been waging a war with Domrani that is believed to be linked to the car bombings in Ashkelon in late 2013. The details emerged after the arrest of eight members of its last week.A senior police investigator handling the case said Saturday that the technological devices seized at a number of locations in southern Israel and the means at the organization’s disposal “would make an intelligence agency proud.”The officer from the special “YAHBAL” International Crime Investigations Unit of the Israel police said the technology included devices used to track the cellphones of their rivals and build hi-resolution mapping of their movements. Police said that some of the gear used by the organization was so sophisticated that they called in officers from the police Cybercrime Unit for advice.In one of the compounds raided by police, officers said they found “a war room” with screens showing footage of their targets while they were under surveillance.On the ground the gang had field operatives, recording equipment, lookouts and soldiers performing full-time surveillance on their rivals, including surveillance vehicles that were stationed outside the houses of their targets.Police said that the hits were not planned casually, rather they were part of a deliberate, meticulous and highly-professional campaign meant to kill a number of associates of Domrani’s organization.“They were looking to carry out the perfect hit,” the senior investigator said Saturday.Another top officer from the YAHBAL unit said “the war between these two organizations has driven them to improve their technological means and their ability to carry out attacks.These are not small level operations they’re planning, they are deliberate, patiently [done] and well-planned.”Police said the investigation began last week after they received specific intelligence that the organization was plotting a hit in the coming days. Police said that they decided to act and make the arrests quickly even though they knew that waiting would potentially increase their chances of attaining more evidence for an indictment.