Ahead of her Saturday performance in Israel, American pop icon stops by music school in Ramat HaSharon to sing with students. 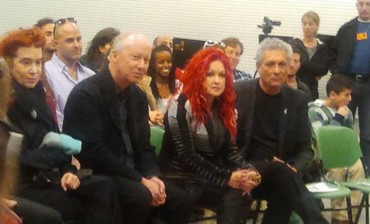 Lauper stopped by the school for a short visit with the students yesterday prior to her highly-anticipated Israeli concert debut. The pop icon, known for classic hits like “Girls Just Wanna Have Fun,” “True Colors,” and “Time After time,” will perform at Tel Aviv's Nokia Arena tonight as part of her ‘She's So Unusual’ tour.The tour marks the 30th anniversary of her groundbreaking album of the same name which won her a Grammy Award as best new artist. Over the past six months, Lauper has taken the tour to sold-out arenas across North America, Australia, and Japan. Recently, the pop star has made waves in the Broadway world. Her critically acclaimed musical, Kinky Boots, won 6 Tony Awards including best musical. Lauper enjoyed listening to the Israeli students perform a medley of songs. The ensemble mixed together some of Rimon’s strongest students. Playing with a myriad of instruments including recorders, pianos, tenor basses, clarinets, strings, shakers and more, the students fused together traditional Iraqi music with modern rock.“I never went to school for music,” said Lauper. “It was so great to listen to a group of students who actually study music. And you guys sight read too. I study with private lessons, but I would love to learn in an environment like this. Amazing.”  Sporting a black leather jacket and fiery red hair, the artist swayed and clapped along to the music. Known for her rebellious anthems, outlandish outfits and carefree energy, Lauper took a backseat from her typical center stage role. Although out of her element with the music, Lauper attempted to join in for a few numbers. “I can’t believe Cyndi Lauper tried to sing with us,” said student and piano player Tal Even-Tzur. “I was scared enough to play for her.” The lifelong musician discussed the importance of spreading music across cultures and shared stories from her past about some of the instruments used during the students’ performance. She joked, for example, about her attempts at playing the recorder in her youth. 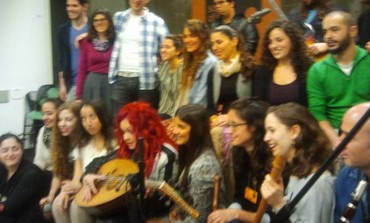 Lauper said she was pleased to have the chance to bring attention to the Rimon School. “It is an international school with so many different voices,” she said. “Music brings people together. I wanted everyone to know about it.” Rimon music student and recorder player Tali Rubenstein said she has dreamed about meeting Cyndi Lauper her whole life. As a devoted fan, she struggled between concentrating on her music and focusing on the singer.“It was a very moving experience,” said Rubenstein. “I kept looking at her from time to time. I tried not to, but it was so hard. I wanted to play my best for her. I saw her bopping her head. She has a great spirit.”Due to time constraints, Lauper cut the visit short, cancelling a previously scheduled press conference after the show. As short as the visit was, teacher Dalal says that Lauper’s appearance at the school will help boost his students’ confidence and give them goals toward the future.“I was so excited to host Cyndi here,” said Dalal. “It was a huge honor for all of us. We all have a love of music, and we got to share that love of music with her. When I saw her trying to sing along, that touched me. That was something special. I think the best way to show Cyndi the true Israel is through music. Music is in our soul and in our blood.”
Advertisement
Subscribe for our daily newsletter