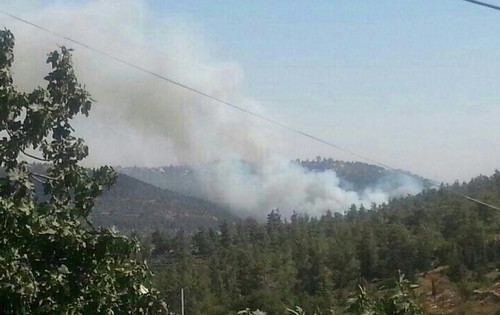 Over 20 fire-fighting units, including seven airplanes, fought to contain two major blazes Wednesday afternoon in moshavs in Even Sapir and Ora in the southwest hills of Jerusalem, as well as a smaller fire in Lifta, a fire official said.According to Jerusalem Fire and Rescue Service spokesman Kobe Erez, the Even Sapir blaze started in a plastics factory containing “dangerous chemical materials” at approximately 4 p.m., while the source of the Ora fire remains unknown. The third smaller fire in Lifta has since been extinguished, he said.“The factory fire is causing a lot of smoke, so we asked people in the area to evacuate until we put it out,” said Erez Wednesday evening. He added that several homes went up in flames in Ora, although no serious injuries have been reported.As a preemptive measure, police temporarily blocked traffic to Hadassah Ein Kerem Medical Center, located near Even Sapir, after nearly 20 homes in the neighborhood were evacuated, Erez said.“Lucky for us the wind is blowing one of the fires that was near Hadassah away from the hospital, but the wind is not being as cooperative in a separate fire in Ora,” he said.Police have opened an investigation into the fires, which come one week after firefighters and rescue workers contained a massive inferno in the Jerusalem Forest last Thursday.That blaze resulted in the destruction of five homes, the evacuation of 200 others in Ein Kerem and Kiryat Hayovel and Yad Vashem, and blocked roads to Hadassah Ein Kerem Medical Center, which nearly resulted in a medical crisis.Following last week’s fire, police said it had developed two strong leads in the case, including possible arson, but no arrests have been made.