Businesses across Tel Aviv host events in solidarity with asylum seekers as many receive summons to report to Holot "open prison."

Stepping into a vibrant event at Jaffa's HaTarnegol restaurant on Sunday night, one would not have been able to guess that the occasion was a somber one: Darfuri asylum seeker Hassan Shakur had been summoned to the Holot "open prison" in the Negev. But he was determined to have an upbeat send-off, and dozens of his friends and supporters came to bid him farewell and share in a rich Sudanese meal that he and his friends had spent hours making.

Shakur told The Jerusalem Post that despite the many hardships that members of his community face in Israel, they recognize and appreciate the fact "the Israeli people are the first people who helped Darfuri people."

HaTarnegol was not the only joint hosting festivities of this kind in Tel Aviv that night; dozens of business owners held similar events in a declaration of solidarity with the thousands of African asylum seekers who face the same fate as Hassan. Under the banner "who are you calling a refugee?" restaurants, cafes and bars welcomed asylum seekers and their supporters in a bid to bring together people of different cultures and to raise awareness.

, which Hassan is actively involved in, organized the event at HaTarnegol as part of their ongoing efforts to put a human face on a sector of society that they say many Israelis have dismissed as criminals, and for them to meet "Israelis who aren't racist." 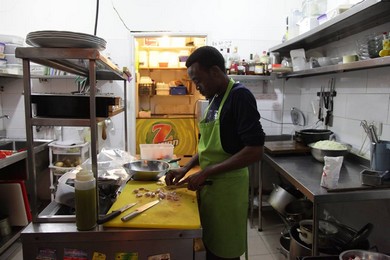 Hassan made it clear that he did not want to be treated like a victim, despite or perhaps because of the turmoil and suffering that the 26-year-old has already endured, including child labor, abuse, religious extremism, discrimination, poverty, homelessness and the loss of his mother who was killed at the hands of Sudanese government soldiers. After having made his way to South Sudan, rumors that Hassan had joined the rebels made it unsafe for him to return to his family, who were living in Kalma displacement camp in South Darfur.

At wit's end, Hassan decided to head for a refugee camp in Egypt, however, he found the camp has been destroyed and was told it was unsafe for him to stay in the country. A week after leaving Sudan, including a brutal journey through the Sinai involving being arrested, locked in a room for three days in harsh conditions, being robbed, humiliated, and held at gun-point, Hassan eventually made it to Israel.

Hassan expresses appreciation for the fact that Israel – in contrast to other countries -- is hosting him and his fellow asylum seekers, but also describes the hardships and lack of rights they are subject to through not being granted refugee status, as well as experiences of racist incidents.

His heart lies back at home though, and he hopes to get a scholarship to study at George Washington University's Banaa: the Sudan Educational Empowerment Network, and to eventually go back to Sudan. His dream is to work as a geological engineer and help "heal the land" through provision of clean water, combating desertification etc.

"After all I believe we are all human beings that deserve to live and enjoy the same rights," he writes in his personal biography. "We shouldn’t concentrate on the past but live the present and plan for a better future, making sure that what happened in the past will never happen again."