Yesh Atid MKs say immigration is not over, condemn "pomp and circumstance" of Jewish Agency celebration.

Two planes carrying 450 Ethiopian immigrants arrived at Ben-Gurion Airport on Wednesday, marking what the government is calling the end of Ethiopian aliya.The immigrants, members of the Falash Mura and descendants of Jews who converted to Christianity around a century ago, were greeted by relatives already living in Israel, during a ceremony that government ministers, MKs and senior Jewish Agency officials attended.Immigrant Absorption Minister Sofa Landver called the end of Operation Dove’s Wings, which has brought 7,000 Ethiopians to Israel since 2010, a “historic event” and promised that the government intended to “do everything in its power to resettle these new immigrants in the best way possible.”Concurrent with the official celebration, several hundred Ethiopian Israelis took to the streets outside the Prime Minister’s Office in Jerusalem to protest what they said was the exclusion of first-degree relatives from making aliya. Police estimates placed the number of demonstrators at around 300.Some protesters carried signs bearing the slogan “A Jewish and Zionist government does not cease the immigration of Jews,” while others held aloft pictures of members of their nuclear families who were not admitted to the Jewish state.Protest organizers Avraham Neguise and Uri Perednik told The Jerusalem Post that they had come to “oppose the closing of aliya from Ethiopia while there are still Jews left behind, most of whom have been parted from their brothers, sisters, children and parents who have been living in Israel for many years.”He added that they had also gathered “to oppose the decision made by the Jewish Agency to take the Torah scroll from the Jewish community in Gondar and to close down their synagogue.” 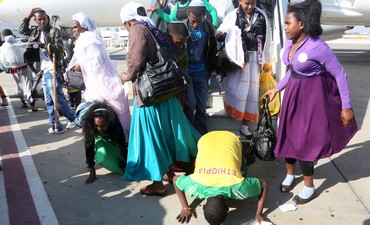