Mofaz, Minister Herschkowitz and MK Peretz among those who attend funeral of Druse soldier, whose remains found after 7 years.

By BEN HARTMAN, JPOST.COM STAFF
Majdi Halabi_370
(photo credit: Courtesy the Halabi family )
Advertisement
Hundreds of people mourned the loss of IDF soldier Majdi Halabi at his funeral in Usfiya on Friday, a day after the IDF confirmed that his body had been discovered in the area, bringing a seven year search for information on his whereabouts to an end. The Druse soldier went missing in 2005.Halabi, the circumstances of whose death were still being investigated by police, was laid to rest at the Usfiya Military Cemetery in a funeral attended by Science and Technology Minister Daniel Herschkowitz, opposition leader Shaul Mofaz and Labor MK Amir Peretz.A Daliat-al Carmel resident discovered Halabi's body in the Carmel forest near Usfiya some two weeks ago. His identity was confirmed through D 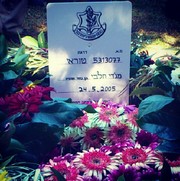 NA testing.Halabi disappeared while traveling from his home to his base in Tirat Carmel south of Haifa.
He was last seen at a bus station in his hometown of Daliat al-Carmel, located on the slopes of Mount Carmel and southeast of Haifa. He was formally declared missing in action on June 6, 2005.Upon the announcement that Halbi's body had been discovered on Thursday, Defense Minister Ehud Barak called Nazmi Halabi, the soldier’s father, and expressed his condolences.“We all, in the IDF and the security community, share the deep grief upon learning of the death of your son,” he said. “I sympathize with your pain and send a warm embrace to the entire family.”Labor Party chairwoman Shelly Yacimovich also sent her condolences to the family, saying: “Our hearts are with the Halabi family; after seven years of long agony, their hopes to find their son alive vanished.”She added: “In these moments we must appreciate the dignity and determination of the Halabi family in their fight to try and locate their son.”
Advertisement
Subscribe for our daily newsletter