Former and current world leaders to attend Knesset memorial service; funeral at Sycamore Ranch to be open for public.

By LAHAV HARKOV, BEN HARTMAN, JPOST.COM STAFF
Knesset guard carry former PM Ariel Sharon's coffin, January 12, 2014.
(photo credit: REUTERS/Ronen Zvulun)
Advertisement
Former prime minister Ariel Sharon, who passed away on Saturday, will be laid to rest on Monday at his Sycamore Ranch in a funeral open for the public.A special memorial service was set to take place at the Knesset on Monday at 9:30 a.m. where members of Sharon's family, President Shimon Peres, Prime Minister Binyamin netanyahu, Knesset Speaker Yuli Edelstein, US Vice President Joe Biden and former British prime minister Tony Blair are expected to speak.Singer Sarit Haded will sing Naomi Shemer's song "We Are Both From The Same Village," and journalist Oded Ben-Ami will host the ceremony.Sharon's sons, Omri and Gilad, will say Kaddish for their father.In addition to Biden, the US delegation will include US Ambassador to the US Dan Shapiro, US Congressman Eliot Engel (NY-16), Congresswoman Debbie Wasserman Schultz (FL-23) and former US ambassador to Israel Daniel Kurtzer.Other current and former world leaders and senior officials who are expected to come to Israel for the memorial service include Russian Foreign Minister Sergei Lavrov, Prime Minister of the Czech Republic Jiri Rusnok, Foreign Minister of Germany Frank-Walter Steinmeier, and other guests. Representatives will also arrive from Australia, Italy, Belgium, Britain, the Netherlands, Greece, Singapore, Spain, France, Canada, Cyprus, Romania and Russia.At the end of the Knesset ceremony on Monday a funeral procession and military convoy was scheduled to set out toward Sharon's Sycamore Ranch where he will be laid to rest next to his wife Lily on the nearby Anemone Hill at 2:00 p.m. in a military burial. 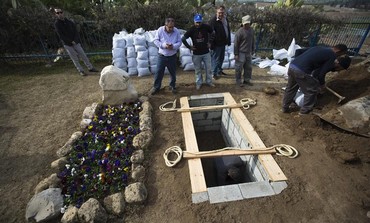 Omri and Gilad Sharon were expected to speak at the funeral, as well as IDF Chief of Staff Benny Gantz.IDF Chief Rabbi Rafi Peretz will read from Psalms and IDF Chief Cantor Shai Avramson will recite the funeral prayer "El male rachamim." On the way to the ranch the procession will stop at Latrun where a special IDF Chief of Staff commemoration will take place. The ceremony in Latrun is not opened to public.An extensive procession of officers traveling on motor bikes and in cars will escort Sharon’s casket for the duration of the journey, scheduled to arrive at the ranch in the early afternoon.“The procession will travel down major highways and be secured at all times,” said Police spokesman Micky Rosenfeld Sunday. “We cannot be certain of the time of arrival due to traffic and heightened security, but it is expected to arrive at the ranch at approximately 2 p.m.”Due to the ranch’s close proximity to the Gaza Strip, police will seal off two kilometers of roads around the burial area, and security forces have included in their preparations the possibility of Palestinian rocket fire from Gaza. Police will deploy 800 officers, Border Policemen, and volunteers to secure the funeral.District spokesman Doron Ben-Hamo said the officers will be deployed in three circles of security around the funeral, which they have labeled a national event and given the code-name “anemones”, after the flowers that dot the hill where Sharon will be buried.The first ring will be closest to the grave, and will be closed to the public and the media. That ring will safeguard Sharon’s family as well as politicians and members of the security establishment, Ben Hamo said.The second ring will stretch for dozens of meters from there, and will be open to the public, with room for around 10,000 people, Ben-Hamo said. The third ring will be surrounding the perimeter of the event, working to maintain the flow of traffic and keep the peace.When asked if there was fear of a possible terror attack, he said such a contingency is always on the radar for police and the security services, and that they have prepared as such.Those wishing to attend the funeral will have to battle with round closures surrounding the area of the Sharon family ranch, with entrance only allowed to residents of the immediate area. Over 150 shuttle buses will leave throughout the day on Sunday from a parking lot at Kibbutz Dorot and another lot at Sapir College in Sderot, Ben-Hamo said. He added that those arriving at the parking lot will have to go through security checks by the Shin Bet General Security Service and that firearms will not be allowed at the ceremony. Defense officials say they do not know how many people will attend the funeral on Monday, adding that authorities will be able to receive mourners from the morning hours Monday morning, well before the funeral begins. The police on Sunday advised members of the public who do not have to drive to the area on Monday to avoid doing so. The Defense Ministry's Logistical Operations and Assets Branch, together with the Families and Memorialization Branch will oversee all aspect of the funeral on Monday.An operations room will be set up for representatives of the Israel Police, Defense ministry, Magen David Adom paramedics, firefighters, and the IDF to manage the event, and hundreds of police officers will oversee the operation, dubbed Operation Anemone. Magen David Adom made special arrangements for the Sharon funeral in Jerusalem and the Sycamore Ranch as a total of tens of thousands of people were expected to pay their respects at the Knesset and at the burial site near Sderot. The first-aid and ambulance organization raised its alert level immediately upon learning of Sharon’s death on Shabbat. MDA staffers and volunteers and vehicles - medics, paramedics, mobile intensive care units (MICUS), jeeps and other four-wheeled drive ambulances and motorcyclists - were informed and called into full duty. A fleet of MICUs was assigned to accompany the entourage from the capital to the Sycamore Ranch. An MDA helicopter was also put on duty. MDA prepared to cope with heavy traffic that would result from the funeral procession. Call 101 for help with any medical emergency during the event.Judy Siegel-Itzkovich, Daniel K. Eisenbud, Yaakov Lappin and Michael Wilner contributed to this report.