By JPOSTLEO GIOSUÈCOM STAFF, LAHAV HARKOV
Vehicle vandalized in suspected price tag attack in Yokne'am
(photo credit: Courtesy)
Advertisement
A vehicle belonging to an Israeli-Arab man was vandalized in the northern town of Yokne'am on Wednesday, in what appears to be the latest in a rash of so-called "price tag" attacks against Arab residents of the area in recent weeks.“Price tag” is the term used to describe acts of vandalism, generally directed at Arabs, to protest government policy.A Nazareth resident who was working in construction in Yokne'am parked in the town and found his vehicle vandalized when he returned an hour later. He told police that two of his tires had been slashed and a Star of David was spray-painted on the vehicle.Afula police opened an investigation into the incident. The incident marked the fifth such attack against Arab property in Yokne'am in the past month. No arrests have been made in the incidents.The tires of seven vehicles were also slashed in Acre on Wednesday, but police believe that it was a case of vandalism and not a "price tag" attack directed against Arabs.The nearby Israeli-Arab village of Fureidis was staging a general strike on Wednesday after unidentified vandals sprayed graffiti on a mosque and slashed dozens of tires Monday night, in a suspected "price tag" attack. All schools and businesses in the town of 12,000 were shut down as part of the strike.On Tuesday night, around 1,500 people took part in a protest march through the village, calling for an end to “price tag” attacks and for police to find the perpetrators. In addition, dozens of residents of nearby Zichron Ya’acov and other Jewish towns came out and protested in a sign of solidarity.Though such attacks began in the West Bank, the past few months have seen a marked increase in “price tag” incidents within the Green Line. Property damage and anti-Arab graffiti have been reported in Jaljulya, Umm el-Fahm, Kafr Akbara, Kafr Kasim and Baka al-Gharbiya, in addition to Fureidis and Yokne'am. 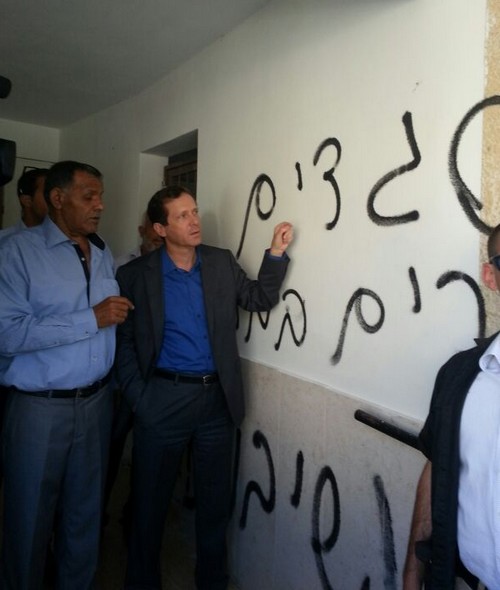 Opposition leader Isaac Herzog visits 'price tag' site in Fureidis
Opposition leader Isaac Herzog (Labor) visited Fureidis on Wednesday, saying that "price tag" vandalism is akin to terror."The police and Shin Bet are acting to catch the perpetrators of this 'price tag,' but in order to do so effectively, they need to have the same tools as the war on terror," Herzog suggested.The Labor leader also said that stopping such acts is not a matter of coalition and opposition."Religious hatred cannot harm [Arab-Jewish] relations in the Fureidis and Carmel Shore area," Herzog added.MK Ahmed Tibi (UAL-Ta'al) asked Welfare Minister Meir Cohen to recognize those harmed by "price tag" acts as victims of terror and for them to receive compensation for their property that was vandalized.The lawmaker also plans to submit a bill that would consider "price tag" as a terrorist organization."If the government doesn't support my proposal, then it proves that it is ignoring these crimes and indirectly encouraging them," Tibi stated.Housing and Construction Minister Uri Ariel said he does not agree with equating "price tag" vandals to terror."There are murderers – we just freed some of them," Ariel said. "Don't confuse the two."At the same time, Ariel called for zero tolerance for "price tag" acts.Ben Hartman contributed to this report.