Los Angeles native Max Steinberg and Sean Carmeli who was raised in Texas were laid to rest on Monday in Israel.

By KELLY HARTOG, BEN HARTMAN
JULY 22, 2014 03:51
Max Steinberg
(photo credit: FACEBOOK)
Advertisement
Families and friends of two Jewish soldiers who made aliya, Sgt. Sean Carmeli, who was raised in Texas, and Los Angeles native Max Steinberg, mourn their deaths in Gaza.Steinberg was among the 13 soldiers killed in the Gaza Strip on Sunday, and his death hit the local Jewish community hard.Steinberg, 24, grew up in Woodland Hills in the San Fernando Valley, attending the local El Camino Real High School and Pierce College before taking part in a Birthright- Israel trip in 2012. He was so inspired by his experience that he returned to Israel just three months later and joined the IDF as a hayal boded, or “lone soldier,” and worked hard on improving his Hebrew so he could join the elite Golani Brigade – where he served as a sharpshooter.Matan Halak, 23, a copywriter at Anashim Media in Beersheba, met Steinberg on the Birthright program. The two grew closer when Steinberg returned to Israel and chose to live in the Negev city.“Max was one of my best friends in the world,” Halak told The Jerusalem Post. “He joined Golani and lived his dream – to fight terrorism and to save his people.”Halak said the two spoke last Friday and Steinberg promised to take care in Gaza. “His big smile will be with me forever.”“I feel like I lost my other half, my soul-mate, my big brother.He believed that the connection between Israel and the USA is forever and he was always happy to serve in the name of his country,” Halak said.That connection was keenly felt in America – especially in Los Angeles – when news of Steinberg’s death was released.Outpourings of love and support were posted on Steinberg’s Facebook page, and his younger brother Jake changed his profile picture to one of the two of them standing in front of the Western Wall.On Sunday night, family, friends and members of the community who didn’t know Steinberg, but wanted to pay their respects, came together at a local park near the family’s home. They lit candles, shared stories, and sang “Hatikva” and the Golani Brigade anthem.Steinberg’s parents spoke briefly at the memorial.His mother, Evie, said of her son’s decision to join the elite unit: “There are those who wouldn’t have wanted to go into combat, but Max did. Max wanted Max to the max.”His father, Stuart, said his son was very excited to move to Israel and join the IDF. “Max had an amazing connection with the people.The experience was beyond anything he could have imagined.”Following the memorial, Steinberg’s friend Bob Goretsky posted on his Facebook page, “Truly a remarkable evening. Max Steinberg, you would’ve loved it. It was, as you’d say, ‘soooooo daaaaaaank.’” In an interview with the Los Angeles Jewish Journal, Evie said her son’s final communication with the family was with his father on Sunday. “The last thing he said to my husband was, ‘Tell mom I love her.’” Steinberg is survived by his parents, brother Jake, 22, and sister Paige, 20.The family flew to Israel Monday morning to attend his funeral.Some 12,000 people attended Carmeli’s funeral in Haifa on Monday night, the day after he died in clashes in Gaza along with 12 of his fellow Golani Brigade soldiers. Among those who attended were Immigration and Absorption Minister Sofa Landver, US Ambassador in Israel Dan Shapiro, Ra’anana Mayor Ze’ev Bielski and Haifa Mayor Yona Yahav. 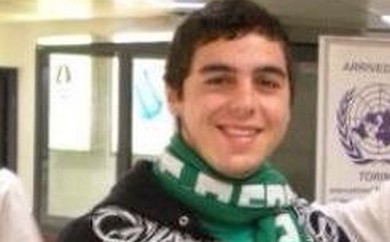 Carmeli was the son of Israeli parents, Alon and Dalya, who grew up on South Padre Island, Texas, a major beach resort near the Mexico border. He later moved to Israel with his parents and decided to stay when they moved back for work, finishing high school at Ostrovsky school in Ra’anana.Rabbi Asher Hecht, the co-director of Rio Grande Valley Chabad, was quoted on a Chabad website as saying that he met Carmeli in the summer of 2006 when he was running a Jewish day camp.He said of the fallen soldier “Sean was a gentle, kind boy” and that: “He was the oldest of the local boys in our camp, and was a sweet and kind example to everyone else.”The Chabad article described the Carmeli family as being leaders in the small Jewish community on the island, part of a larger Jewish community anchored in the nearby border town of McAllen, Texas.“Our hearts go out to his parents and dear sisters, Gal and Or,” said Hecht. “They lost their only son today, their only brother. The vacuum left by this tragedy will never be filled.The Maccabi Haifa fan page called on fans to attend the funeral, so that the lone soldier would be buried before a crowd befitting a native son. Buses were organized from Ra’anana and elsewhere in central Israel for the funeral, which was held at 11 p.m. to allow his parents to make it to the ceremony from Texas.The Michael Levin Lone Soldier Center’s Facebook page wrote that Carmeli was a returning citizen who came to Israel to “strengthen, unite, and define what it means to be a Jew today.”“Everything may be bigger in Texas, but the beaches and parties could not distract a native son from returning home to defend and protect his people.”
Advertisement
Subscribe for our daily newsletter