By DANIEL K. EISENBUD
Temple Mount
(photo credit: REUTERS)
Advertisement
A video taken Wednesday morning shows a group of some 40 Jewish visitors who ascended the Temple Mount to pray for the three abducted yeshiva students being accosted by hundreds of Palestinian men, women, and children, who taunted them and threatened violence.The video, taken by a member of the Temple Institute, which lobby’s for Jewish prayer rights at the holy site, initially shows dozens of Palestinian children surround and shout at the Jewish group, as it is escorted by a handful of policemen. Moments later, Muslim women and men join the fray.Members of the incensed mob are seen taunting the group by holding three fingers in the air, signifying the abduction of Naftali Fraenkel, Gil-Ad Shaer, and Eyal Yifrah, as the Jewish visitors attempt to ignore them.Following the incident, the Temple Institute issued a statement describing the event: “On the morning of June 25, 2014, some 40 Jews ascended the Temple Mount to be seen by God and pray on behalf of the three Jewish teenagers who were kidnapped by Hamas terrorists two weeks ago. Hundreds of Muslim men and women and a Hamas-organized summer camp for Muslim children greeted the Jews with thunderous jeers and curses, waving their shoes and holding up their newly minted obscenity: a three-finger ‘victory’ sign, signifying their gloating pride in the kidnapping of the three Jewish boys.” 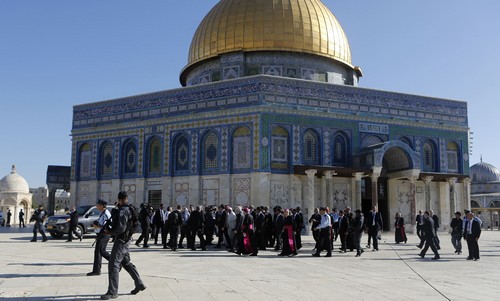 According to Rabbi Chaim Richman, director of the institute’s international department, who was among the visitors, despite doing nothing to antagonize the Arabs, the group was aggressively followed and jeered during the entirety of their visit.“Eventually they surrounded us on all sides waving their fists and screaming at us,” he said. “The police obviously didn’t know how to deal with it.”Shaken after the encounter, Richman added that, “This mob that formed was chilling.To see this kind of venomous hatred in the faces of children holding their three fingers in the air was unnerving.”No arrests or injuries resulted from the melee, police said.

Leave the IDF out of politics - editorial