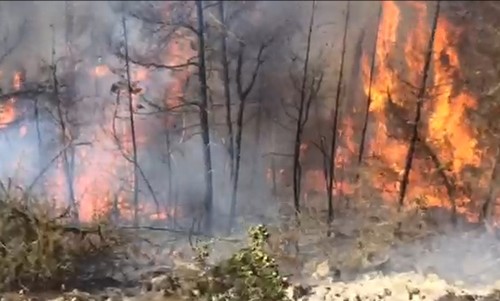 As the blaze spread throughout the afternoon, Shaare Zedek Medical Center personnel organized to accommodate the influx of patients cut off from Hadassah-University Medical Center in Ein Kerem.Fire crews assembled from across the country to battle the blaze, which raged over an estimated 40-60 dunams (10-15 acres), as hundreds of police officers were dispatched to ensure the safety of thousands of endangered neighborhood residents.Police closed off roads near the fire to vehicles and pedestrians, and the light rail was temporarily closed between Denmark Square and Mount Herzl.According to Jerusalem Fire and Rescue Service spokesman Kobe Erez, it is believed the fire started in the Jerusalem Forest at roughly 1 p.m.“It started somewhere in the woods, but we still don’t know the details of how or where,” Erez said.
Firefighters battle flames near Ein Kerem/JERUSALEM FIRE DEPT.Several homes in Ein Kerem and Kiryat Hayovel were damaged during the blaze, he said, although Yad Vashem and all area hospitals were spared. As a precaution, the Israel Electric Company shut down service in much of the area to avert further danger.Asaf Finkelstein, spokesman for Aley Siach, an organization that treats and houses disabled children, said up to 40 children living in two homes in Kiryat Hayovel were evacuated to an alternative shelter in the capital.“The whole neighborhood is under a cloud now and the children will have to spend the night in a strange environment,” he said. “We were told that we cannot return until the fire is extinguished.”Judy Siegel contributed to this report.