Dignitaries gather outside of legislature for memorial; Peres says Sharon cultivated the land with his scythe and defended it with his sword; Sharon to be laid to rest later on Monday on his Negev ranch. 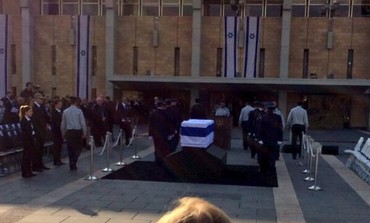 Prime Minister Binyamin Netanyahu addressed the funeral procession for Israel's 11th prime minister Ariel Sharon on Monday morning at the Knesset saying Sharon as one of the greatest military men of the Jewish people and the IDF, who was in the founding generation of the state.
"The establishment of Israel depended on a generation of brave fighters to rebuild a legacy of Jewish bravery that seemed to have disappeared. Ariel Sharon had a central role in rebuilding this legacy." Netanyahu said. "As a minister and a prime minister Sharon stood for our right to defend ourselves and live with security," he said.
President Shimon Peres addressed the funeral procession earlier, saying that Sharon was the shoulder on whom Israel's security rested. "Your footprints are imprinted on every hill and in every valley. You cultivated the land with your scythe and defended it with your sword," Peres said. Tweets from https://twitter.com/jpostdesk/ariel-sharon-funeral
US Vice President Joseph Biden addressing memorial said that Sharon's north star was the survival of the State of Israel and the Jewish People wherever they resided. Biden quoted Sharon as saying "Before and above all else I am a Jew. My thoughts are dominated with the Jewish future." Sharon is scheduled to be laid to rest near his Sycamore Ranch in the Negev on Monday afternoon in a ceremony that is expected to attract tens of thousands of mourners from across the political spectrum.The emotional highlight of the Knesset event is expected to be a speech by settler leader Ze’ev “Zambish” Hever, a longtime confidant of Sharon who broke ties with him when the then-prime minister decided to evacuate the Jewish residents of the Gaza Strip.The procession will then continue to Latrun, where a special meeting of the IDF’s general staff is set to be held, and conclude at Sycamore Ranch with Sharon’s burial and speeches by his sons, Omri and Gilad, and by IDF chief of staff Lt.-Gen. Benny Gantz.Six generals are to carry Sharon’s casket to his grave, and other procedures for military funerals will be followed at the ceremony.Sources close to Sharon expressed concern Sunday that extremists would try to disrupt the funeral.Due to the ranch’s close proximity to the Gaza Strip, police plan to deploy 800 officers, border policemen and volunteers to secure the funeral.The air force and the Iron Dome missile defense system are to protect the funeral from attacks from the Gaza Strip. A source close to Sharon confirmed that Iron Dome batteries had been specially deployed for the ceremony.“I hope no crazy man in Gaza says ‘They are all there, so let’s finish them,’” a Sharon associate said. “There will be massive security, so we expect the event to pass quietly.”Despite condemnations of Sharon from Bayit Yehudi MK Orit Struck and other voices on the far Right, Sharon’s associates said they did not expect any provocations from Jewish extremists. But former cabinet secretary Israel Maimon said precautions for handling hecklers had been taken.“It is too special a day and there is too much respect for him for that to happen,” a source close to Sharon said.“But then again, it’s a democratic country.”Omri and Gilad Sharon specifically asked to allow as many people as possible to attend the funeral. Massive screens with coverage of the funeral will be placed a distance away from the grave site to enable the crowds to watch the ceremony.There is also to be a tent set up for media teams from around the world who will be covering the funeral. Following the scandal at the funeral of the late South African president Nelson Mandela, the most professional interpreters in Israel will translate the ceremonies into English.Thousands of people came to the Knesset Sunday to pay their last respects to Sharon.But the public is not invited to the event at the Knesset on Monday.“I am sure that among those who came, there are those who disagreed with him politically, but they all respected him,” Knesset Speaker Yuli Edelstein said.
Advertisement
Subscribe for our daily newsletter