BBC survey measures public opinion on 22 countries, places Israel in company of North Korea, ahead of only Iran, Pakistan.

By JPOST.COM STAFF
PRO-PALESTINIAN protesters hold a banner 390
(photo credit: REUTERS)
Advertisement
Israel retained its position as one of the world's most negatively-viewed countries, according to BBC's annual poll published Wednesday night. With 50 percent of respondents ranking Israel negatively, Israel keeps company with North Korea, and places ahead of only Iran (55% negative) and Pakistan (51% negative). 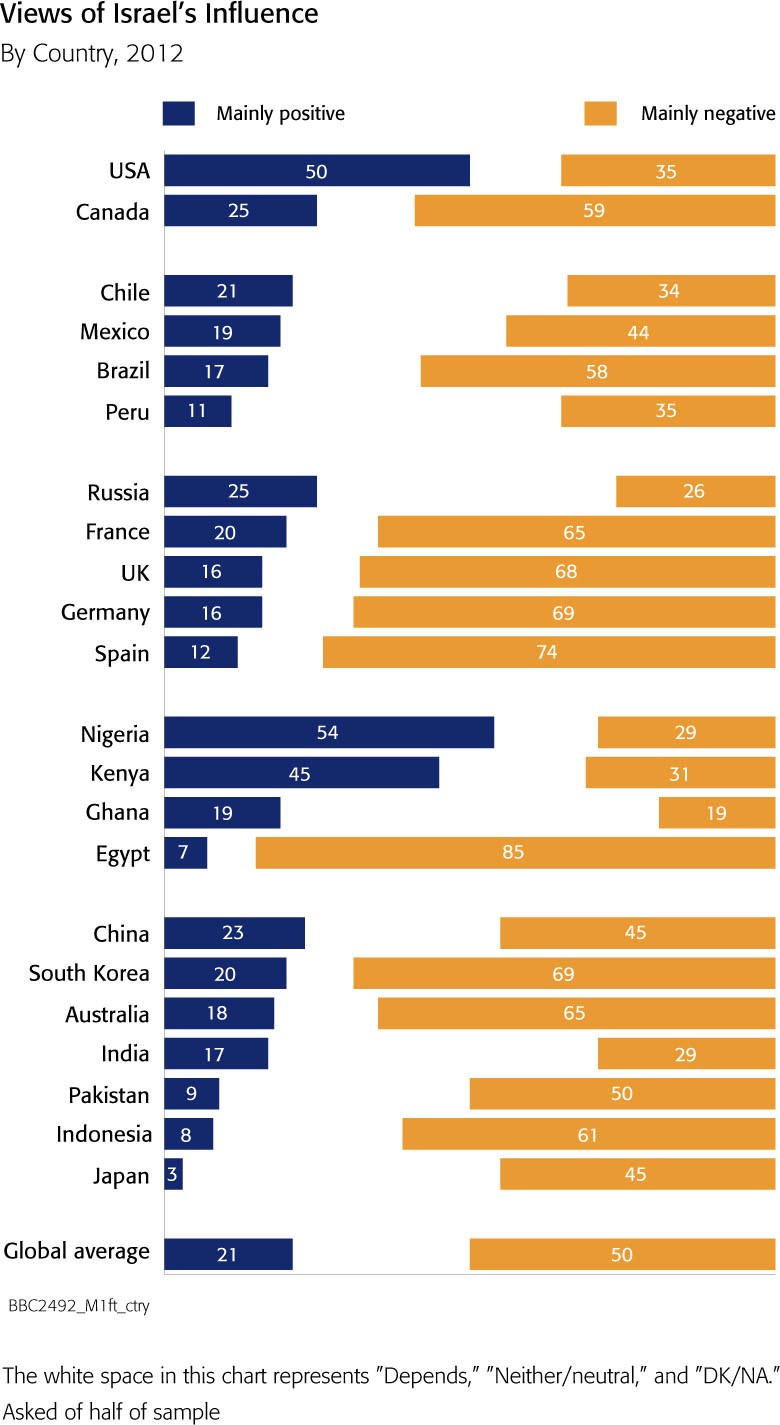 The 2012 Country Ratings Poll was conducted among 24,090 people worldwide, and asked respondents to rate whether the influence of 22 countries was “mostly positive” or “mostly negative.”Evaluations of the Jewish state, already largely unfavorable in 2011, have worsened in 2012. Out of the 22 countries polled, the majority in 17 of them view Israel negatively, while only three (the US, Nigeria and Kenya) view Israel positively. In Kenya, negative ratings of Israel fell by 10 points to 31%, while the country experienced an even larger increase in positive ratings of Israel, rising 16 points to 45%.Negative perceptions of Israel in EU countries have continue to rise, reaching 74% in Spain (up 8%), 65% in France (up 9%), while in Germany and Britain the negative views remain high but stable (69% and 68% respectively). In other Anglo countries, perceptions of Israel are worsening, including in Australia (65%), and Canada (59%).Among Muslim countries, perceptions of Israel have continued to deteriorate. Of particular concern for Israel is the country sitting on its southern neighbor, Egypt, where 85% of the population views Israel negatively, up 7% since 2011. In Asian countries, public opinion on Israel is growing increasingly antagonistic. In China, just 23% of those surveyed view Israel positively compared with 45% negatively. In India, overall opinion has shifter from being divided in 2011 to leaning negatively. In South Korea, negative views of Israel rose a full 15% (to 69%), while positive views decreased 11% (to 20%)The saving grace for Israel is United States, where the proportion of people viewing Israel negatively has decreased six points to 35% since 2011. This statistic marks the most positive views on Israel expressed in the US since tracking began in 2005.People viewing Israel negatively around the world cite the Jewish state's foreign policy as the main factor influencing their perception, while those who view Israel positively cite culture and Jewish traditions.