Winter settles in, parts of Israel blanketed with snow

Jerusalem municipality, regional councils in Judea and Samaria announce school closures; Buses to run as scheduled, according to Transportation Ministry.

By JPOST.COM STAFF
DECEMBER 12, 2013 08:52
IDF soldiers in snow 370
(photo credit: IDF Spokesman’s Office)
Advertisement
The snowfall in Jerusalem and higher elevation areas forced the cancellation of school on Thursday, Israel Radio reported.The Jerusalem municipality announced that all classes would be suspended, while Hebrew University released a statement indicating that there would be no instruction on Thursday. 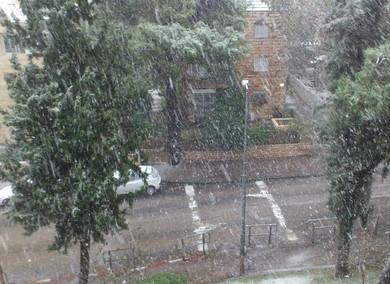 Jerusalem authorities have suspended bus service in the capital due to the accumulating snowfall on the ground, Israel Radio reported.Officials shut down Route 1 at the entrance to and exit from Jerusalem due to slick conditions, according to Israel Radio.All traffic is being detoured to Route 443.Schools will remain open in the Golan Heights and the Upper Galilee, according to Israel Radio.
Snowy Jerusalem street 390 (Photograph: Amy Spiro)
Snowy Jerusalem 390 (Photograph: Ilan Evyatar)
Edelstein with dog in snow 390 (Photograph: Knesset Speaker's Office)
Snowy Jerusalem 390 (Photograph: Menashe Koren)
Snowy Jerusalem 390 (Photograph: Nofar Ben Matityahu )
Snowy Jerusalem 390 (Photograph: Seth J. Frantzman)
Knesset in Snow 390 (Photograph: Knesser Speaker's Office)
Snow continues to fall in Judea and Samaria. The Binyamin regional council announced on Thursday that classes would be canceled in Ofra, Beit El, Psagot, Kochav Ya’akov, Tel Tziyon, Shiloh, Eli, Shvut Rachel, and Ma’aleh Nevonah.
Classes were also canceled in the Jerusalem suburbs of Mevaseret Tziyon and Har Adar.Other towns and settlements that canceled class on Thursday include Har Bracha, Yitzhar, Kiryat Arba, Gush Etzion, Betar Illit, Tzur Hadassah, the Tamar regional council, Shafir, and Alumah, Israel Radio reported.The municipalities of Rahat, Umm al Fahm, Ma’aleh Iron, and the towns in the Neveh Midbar and El Kasum council all announced school closures on Wednesday night. There will be no classes in Kafr Kara, Segev Shalom, Jat, and Baqa al-Gharbiya.The Transportation Ministry announced that all intercity buses are running as scheduled, while buses whose lines run along the flooded Arava roadway will be rerouted.Weather conditions on Thursday led to road blockages throughout the country, perhaps most notably shutting down a portion of Road 1 – the main thoroughfare from Tel Aviv to Jerusalem – during the late morning. At 11 a.m., Egged bus company reported that it had discontinued the operation of all lines to and from Jerusalem, as well as city bus operations within Jerusalem.Direct lines to and from Haifa, Tel Aviv, Ashkelon and other destinations ceased running. However, the 947 line from Haifa continued to operate, though terminating and and starting from Ben Gurion Airport rather than Jerusalem, information from Egged said. Also due to the harsh weather conditions, the company decided to cancel its night lines connecting Tel Aviv and Jerusalem.Egged warned that there are also ongoing disruptions in transportation in the Gush Etzion and other Judea and Samaria regions, particularly along Road 90, due to flooding.Arkia and Israir, two of Israel’s domestic air travel companies, announced that their flights to and from Eilat will take off and land at Ben-Gurion International Airport instead of its usual terminus at Sde Dov in Tel Aviv.The first snow of the season began to fall Thursday morning in parts of Jerusalem as a cold front swept through Israel and surrounding areas in the Middle East.The Education Ministry has opened a hotline for updates on school operations in light of the weather, available by telephone at: 02-6222211. Powerful winds rattled windows and unmanageable floods closed down select schools on Wednesday.“It seems now that it is quite certain that it will snow,” Dr. Amos Porat, director of the Climate Department at the Israel Meteorological Service, told The Jerusalem Post on Wednesday afternoon.This video is courtesy of Yoav Steinman.In addition to the more than 10 centimeters of snowfall slated to hit the North on Thursday, up to 10 centimeters of snow is expected to fall on mountain peaks in the country’s central and Jerusalem areas, according to the IMS.Flurries will likely fall over Mizpe Ramon in the Negev, and the largest amount of snow will likely accumulate in the Hebron and Gush Etzion regions – reaching heights of up to 15 to 20 cm., the IMS reported.While this would be the third year in a row for Jerusalem to receive snow, Porat stressed that this only constitutes a coincidence, not a trend.This video is courtesy of Doron Leitner.Over 25,000 Israelis are without power due to the inclement weather, the Israel Electric Company told Israel Radio on Thursday.IEC customers in Be’er Sheva, Arad, and Ein Gedi have been disconnected from the electric grid, according to Israel Radio.The electricity provider said it anticipates a larger than usual consumption of power due to the extreme weather conditions and that it was preparing to generate more if necessary.Heavy amounts of rain drenched the Galilee, the Sharon region and Gush Dan overnight on Tuesday, causing Lake Kinneret’s water level to rise by one centimeter on Wednesday morning, according to the Water Authority. By Wednesday afternoon, after additional heavy rains, the Water Authority reported that the Kinneret had risen an additional centimeter, bringing the basin up to 211.38 meters below sea level – 2.58m. from full capacity.Sharon Udasin, Lidar Gravé-Lazi and Ben Hartman contributed to this report.
Advertisement
Subscribe for our daily newsletter