Israel Anti-Drug Authority apologizes after running ad campaign invoking deaths of famous musicians, most of whom did not die from drugs.

By YONI DAYAN
DECEMBER 5, 2011 13:18
Amy Winehouse 311 R
(photo credit: REUTERS/Andrea De Silva)
Advertisement
The Israel Anti-Drug Authority issued an official apology Monday for its "cynical use" of the death of famous singer-songwriter Amy Winehouse. Ya'ir Geller, director-general of the Authority, said in a letter that they were "very sorry about the untimely death of the Amy Winehouse. We are also sorry for exploiting her death for the advertising campaign."In August, immediately following Winehouse's death, the Anti-Drug Authority decided to instigate a campaign discouraging Israeli youth from engaging in drugs. The campaign slogan was "it's really uncool to die at age 27," referencing a host of famous musicians that passed away at that age, including Jimi Hendrix, Jim Morisson, and Janis Joplin. "They all died from drug use at age 27," the campaign advertisement ran, "But you have much more to do in life. Don't do drugs." RELATED:
Marijuana component may ease pain from chemo therapy drugsAn autopsy performed following Winehouse's passing revealed that the cause of the singer's death had nothing to do with drugs.In fact, the majority of musicians listed in the Anti-Drug Authority advertisement did not die as a result of drug use. 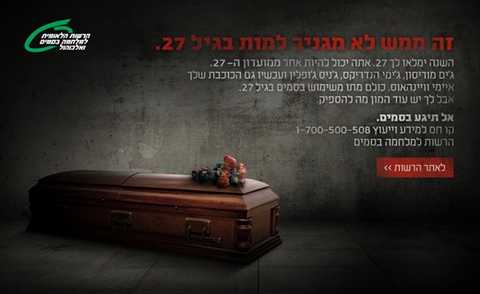 The Antidrug ad. "Dead at 27"The campaign drew the ire of numerous Winehouse fans, and eventually that of Dekel David Ozer, founder of the non-partisan parliamentary organization 'Dor Ha'emet' dedicated to the legalization of marijuana. Ozer, a lawyer, sent a scathing letter to the Anti-Drug Authority, demanding an apology for the "fictitious and abusive" use of the musicians' deaths. "In the beginning of August," he wrote, "you decided to dance on the blood of one of the greatest soul singers, Amy Winehouse... With the exception of Janis Joplin, who died of a heroin overdose- not just 'drugs', there is no proof that any of the other singers died from drug use."Ozer referenced the deaths of Jim Morisson, who died of a "heart attack", and Jimi Hendrix, who died of suffocation induced by sleeping pills.Ozer demanded an immediate official apology to the public, declaring that "false advertising by a governmental organization constitutes a criminal offense, including fraud, breach of trust, and defamation."According to Ozer, Israeli legislators are conducting a campaign of intimidation that lumps up various types of substances under the overly-simplistic label "drugs." He decried the lack of distinction between highly addictive chemical substances such as heroin and natural substances such as marijuana, which he said leads to harsh penalties for anyone caught using marijuana. Furthermore, Ozer stated that tens of studies have shown that marijuana has no inherent health risk, as opposed to alcohol, which is fully legal.Ozer's 'Dor Ha'emet' organization says it is committed to helping the over 600,000 marijuana smokers in Israel who find themselves persecuted, stained with a permanent record, and thrown in jail without cause.