By BEN HARTMAN
TA bus bomb 370
(photo credit: REUTERS/NIR ELIAS)
Advertisement
A terrorist attack on a central Tel Aviv bus resulted in 28 people being hospitalized on Wednesday morning in the first such attack in the city since 2006.The bomb exploded on the Dan No. 142 bus line on Shaul Hamelech Street near the Defense Ministry headquarters and around the corner from Ichilov Hospital, blowing out all the windows of the bus and leaving dozens in need of medical assistance.The attack was not a suicide bombing, and police said they are investigating whether the attacker left a bomb on the bus or threw something on and ran. Police did say that one man was seen fleeing the site, but would not confirm reports that a suspect had been arrested.Driver Nachum Herzi said the bus was not very full when the explosion happened, and that after the blast, he continued to drive for a few meters until he was able to pull over and help passengers off. Herzi, who was not wounded, said he did not see anyone suspicious board the bus before the explosion, a statement that was heard repeatedly at Ichilov Hospital, which is part of Sourasky Medical Center.The hospital reported on Wednesday night that, of a total 28 patients taken for treatment, five remained in the hospital, one in moderate condition and four with for light injuries. Twelve people of those hospitalized were treated for shock and released, while the rest were lightly or moderately injured.

Click for full JPost coverageThe hospital originally reported that two teenagers were the most seriously wounded, but by 6 p.m. on Wednesday they reported that both had been discharged from the hospital.Doctors said that, judging by the small number of severe injuries, the bomb was not as large as those used in previous terrorist attacks in the city.A look at the bus on Wednesday confirmed this assertion. Although it was severely damaged, the bus was not a smoldering, charred wreck and the devastation was not the same as Israelis saw in the suicide bombings of the second intifada of 2000 to 2005.Public Security Minister Yitzhak Aharonovitch visited the hospital after the attack and said that the ministry and police, expecting attempts to carry out terrorist attacks on civilians during Operation Pillar of Defense, had deployed police and Border Police forces across the country to deal with the threat.He also said that security forces had suspicions about which terrorist organization was responsible for the attack, but would not elaborate.On Wednesday night, police reported that they were still on the hunt for a man seen fleeing the scene, who they believe was involved in the bombing. They added that they have beefed up patrols around the city to find the suspect and prevent further attacks from taking place.There were major traffic jams reported throughout the Dan region, as well as in the Modi’in area as police set up roadblocks.For residents of Tel Aviv, the blast was a bitter reminder of the terrorism of the second intifada, when Tel Aviv and other cities across the country were repeatedly hit by suicide bombings that changed the fabric of Israeli life.For Amira Castro, 56, who was hospitalized with shock after witnessing the bombing, the answer was simple: The IDF must launch a ground operation in the Gaza Strip in order to bring peace and quiet to the home front.“I have four sons in combat units, and as much as I worry about them, and I know we’ll pay a price in an invasion, we have no security for our citizens and the government must do something to make our suffering stop,” she said.Castro added that in the meantime she won’t be riding buses in Tel Aviv.At the scene of the bombing on Wednesday, a young Palestinian couple from Kalkilya walked their daughter away from the bombing, and made their way to the bus station after they had taken her for treatment at Ichilov Hospital around the corner. 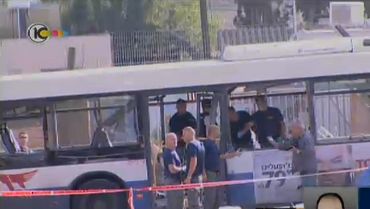 As his daughter cried and he tried to calm her down, Bader Badir voiced a desire for quiet on both sides, and expressed his opposition to violence against civilians, both in Gaza and in Israel.Paramedic Israel Kornik said at the site of the bombing, “If this is happening while we’re talking about a cease-fire, why stop [Operation Pillar of Defense]? We can’t stop; the IDF must keep working until they finish the job.” 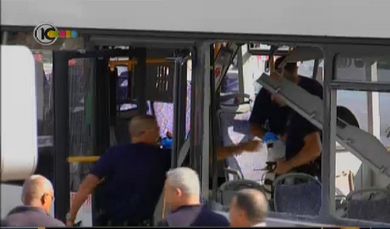 Haim Shefer, 62, said he was at his home about 100 meters from the blast but did not think it was a terrorist attack because the blast was small.When asked if he thinks the era of terrorist attacks could be making a return, he said, “I don’t think so. They’re trying to get us here to show that if we hit them, they’ll hit us. But they can’t win by force and neither can we.“I’m against a ground invasion. It’s time for both sides to sit down and talk,” Shefer said.
Advertisement
Subscribe for our daily newsletter