A sea of people revel in the streets of Jerusalem to mark the 47th anniversary of the reunification of their city.

By DANIEL K. EISENBUD
MAY 28, 2014 21:37
Thousands celebrate Jerusalem Day
(photo credit: MARC ISRAEL SELLEM/THE JERUSALEM POST)
Advertisement
Video by Eli Mandelbaum
Amid a specter of countless waving Israeli flags, thumping cacophonous music and uninhibited singing and dancing, a sea of young Jews reveled in the streets of Jerusalem Wednesday night to celebrate the anniversary of the reunification of their city.Indeed, Jaffa Road, one of the capital’s main thoroughfares, was transformed into an elongated street party as far as the eye could see, as thousands of Israelis joyously gathered to celebrate the 47th Jerusalem Day.“I came out especially for today because it is a very special day for the Jewish nation,” said Avital Roth from Beersheba. “It is today that we got back [Jerusalem], and it’s the center of everything that’s supposed to be in our lives.”“Today is important because Jerusalem is sacred and holy and it feels like everyone is united,” added her friend Atara Yesharim, who visited the city from Ein Tzurim, near Ashkelon. “It’s normally scary to go to east Jerusalem, but today I have no fear.” 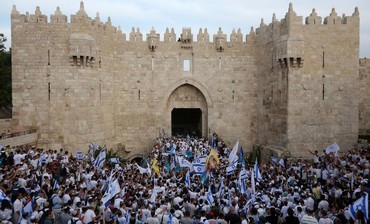 Gabriel Rosenberg, a 19-year-old Jewish studies student, framed the festive celebration into a historical perspective.“We were kicked out for a couple thousand years and now we’re finally back in our home town, in the holiest place in our religion,” he said. “It’s very important to celebrate that we’re back here and that we’ll stay here!” “We take it for granted now that we have this – how we can walk down the street to grab a coffee now – but we need to remember that it wasn’t always like this,” added Rosenberg’s friend, Daniel Abromowitz.“It wasn’t as free as it is now.” 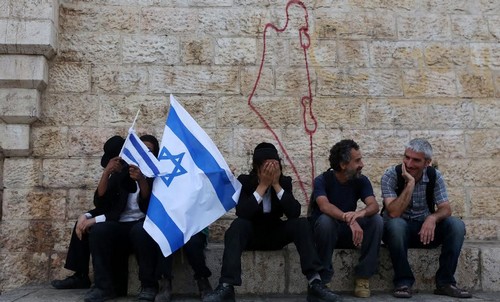 Maor Shoshana, a student at Bar-Ilan University, cited the Western Wall as the most significant element of the city’s reunification during the Six Day War.“The Western Wall is one of the holiest places in the world, and it’s the only place where I personally feel I am speaking to God, and we didn’t have that before,” he said. “And when we finally got it back, we realized the significance of it, and now we’re celebrating the fact that we can go there freely without having to be scared.”Yoram Hodeda, who was joined by his wife and three children, said he viewed Jerusalem Day as a step toward the coming of the Messiah.“We can now go to the Western Wall to pray and believe it is the start of the coming of the Messiah,” he said. “Over the last 2,000 years Jews lived in the Diaspora and prayed, ‘Next year in Jerusalem.’ Now we are rebuilding Jerusalem and pray for a Third Temple. We have come a long way and hope he will come soon.” 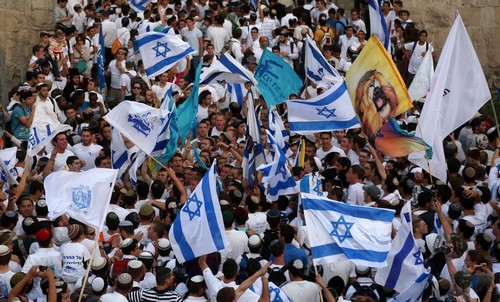 Daniel Tsur, an ultra-Orthodox man standing in nearby Zion Square, said he viewed Jerusalem Day metaphorically.“I think for us Independence Day is the body of the Jewish people – the physical part,” he said. “But Jerusalem Day is more of a spiritual part. It’s our soul.”Meanwhile, newlywed Samantha Polon, who was visiting the city on her honeymoon from America, said she was awed by the spectacle.“As tourists it surprising and incredible to see the show of nationalism,” she said. “At the same time, I feel connected to the struggle my family had, as they were all Zionists connected to the formation of the State of Israel in 1948.”A nearby group of teens on Ben-Yehuda Street, who came from Ashkelon, could barely control their excitement.“Jerusalem Day is the best day of the year!” shouted Matan Karavani. “I wait for this day because it’s special to celebrate the day we conquered Jerusalem!” His friend, Amit Berti, framed the celebration in less strident terms.“Jerusalem is a very holy place for all three religions, that’s why I love it so much – because it’s a place of peace, even though there is war all around us,” he said. “God gave everyone this place, and it’s the holiest place where he chose to put his temple.”Kevin Wolf, who moved to the country two years ago, described Jerusalem Day as a critical element in the Jewish narrative.“It’s part of the Jewish narrative that we wanted to come back to Jerusalem after being exiled for 2,000 years,” he said. “Forty- seven years ago there was literally a whole revival of Jewish pride throughout the world. Jews were coming out of the woodwork in the Diaspora and you can feel it in our story that this is an important step.”As he watched three young women dance nearby while draped in Israeli flags, Wolf continued, “You can really feel it on the anniversary the Old City was captured.”
Advertisement
Subscribe for our daily newsletter