Biblical holiday held annually 50 days after Yom Kippur to pray for repentance, and deliverance to Jerusalem.

By DANIEL K. EISENBUD
Ethiopian ethiopia sigd holiday 390
(photo credit: Marc Israel Sellem)
Advertisement
Thousands of Ethiopian Israelis from across the nation gathered in the capital Thursday to celebrate Sigd, a holiday marked 50 days after Yom Kippur by repenting for sins and praying for a return to Zion, the coming of the Messiah and a Third Temple.Officially designated a national holiday in Israel in 2009, it is said that Sigd was observed for 2,500 years by Jews in Ethiopia. Since their mass exodus from the country, mostly in the 1980s and early 1990s, Ethiopian Israelis now gather annually in Jerusalem to mark the day.Thursday’s ceremony, held at the Sherover Promenade in the southeastern part of the city, was attended by Jerusalem Mayor Nir Barkat, Absorption Minister Sofa Landver, Minister of Education Shai Piron, Sephardi Chief Rabbi Yitzhak Yosef, and numerous MKs, rabbis and priests.“Today is important because this holiday began in Ethiopia a long time ago,” said Tamir Sanbatao, 32, of Petah Tikva, who immigrated with eight family members during Operation Moses in 1984.Sanbatao, now the father of three, noted that in Ethiopia the holiday was observed in a fashion far different from Thursday’s festivities, which included dozens of food vendors, singing and dancing.“In Ethiopia we fasted the entire day and climbed a local mountain to pray for forgiveness and deliverance to Jerusalem. Now that we’re here we pray the Messiah will come and that a third Temple will be built,” he said.“Even though we’re celebrating today,: he explained, “we’re still waiting and praying for this day to come.”Thirty-eight-year-old Mevrat Lior Perdu, arrived with his family during Operation Moses and is a teacher living in Azor, near Tel Aviv.“This holiday is very special because in the Kaballah it says that there are 49 gates to go to heaven after Yom Kippur, and if someone didn’t get forgiveness he has a second chance on the 50th day, which is today,” Perdu said.While he is pleased to live in Israel, he added that his “journey” will not end until the Messiah comes and the Third Temple is built.“We are still on our journey here because we will not reach the last stop until that time,” he said. “We will never quit until then.”Meanwhile, actor and producer Shai Fredo – who founded the Sigdiada Festival in Tel Aviv two years ago to celebrate Ethiopian culture with other Israelis as a prelude to Sigd – described the holiday as “beautiful.” 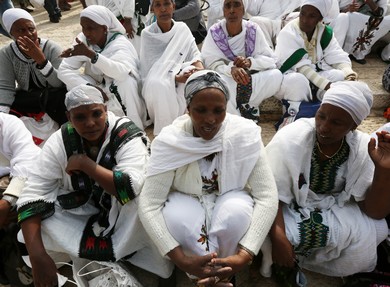 “It’s a beautiful day for us because in Ethiopia we’ve celebrated it for 2,500 years,” Fredo said. “Finally, after thousands of years, we are here and we can pray and celebrate to say thank you to God for taking us here.”He added that he hoped one day the holiday would be embraced by the entire nation.“This holiday is for everyone, not just the Ethiopian people,” he said. “The reason I started the Sigdiada Festival was to show other Jews the beauty and diversity of our culture.”Pnina Rada of Tel Aviv, who came during Operation Moses at the age of seven, echoed Fredo’s sentiments.“I’m deeply, deeply happy that we are keeping this holiday because it’s the reason we’re here,” she said. “The adventure now is to make this a holiday for all of Israeli society.”Asked if she believed whether the Ethiopian immigrant community had been truly integrated into society, Rada said much work still needed to be done.“I don’t think we’re in a place of 100 percent integration because we are still not getting good jobs or being adequately represented in businesses,” she said, attributing this to general ignorance about Ethiopian people and culture.“People think they know everything about Ethiopians, but they don’t and we want them to know the diversity of our culture,” Rada added.“We don’t want people to think of us as ‘uneducated Ethiopians.’” While she conceded that complete integration remained a problem, she was optimistic that one day Ethiopians would be viewed as an integral part of Israeli society.“I hope there will be a time when Israeli society sees Ethiopian people as an important part of it, and I think we are on our way,” she said.The Ethiopian mass exodus to Israel began during the Marxist-Leninist dictatorship of Mengistu Haile Mariam, who murdered thousands of African Jews, separated families, displaced survivors, orphaned children and forbade all from practicing Judaism. This oppression – compounded by unparalleled famine, the highest infant mortality rate in the world and the constant threat of war – resulted in an untenable existence for the country’s tens of thousands of Jews.Under the auspices of the Israeli government, covert rescue missions known as Operations Moses and Joshua, and 1991’s massive Operation Solomon, saved more than 21,000 Ethiopian- Jewish lives.
Advertisement
Subscribe for our daily newsletter