Too little too late? After dry season rain begins to fall in Israel

Highway 40 from The Zin Valley to Mitzpe Ramon was closed due to desert flooding; rain also begins in north. 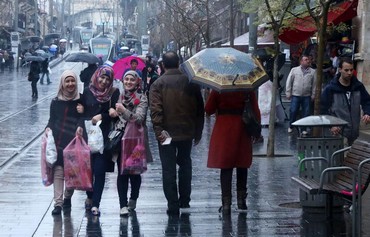 With one of Israel's driest winters on record nearing its end, light rain began to fall in various parts of the country on Sunday. As of 5 p.m. a wide band of rain stretched from north of the Sea of Galilee to the southern Negev.  The Red sea resort city of Eilat also received rare showers.Due to floods in the desert, police closed Highway 40 from The Zin Valley to Mitzpe Ramon on Sunday afternoon.After the prolonged drought conditions, it would take large amounts of rain to cause the country's streams to flow and for the level of the Sea of Galilee to rise. The low rates of flow in the streams was among the lowest ever recorded for this time of year.During February, there was primarily a single episode of rain that impacted the water, and Lake Kinneret rose only 2 centimeters – in comparison to 37 centimeters in the same period last year. Since the beginning of the rainy season, the Kinneret had only risen 4 centimeters, in comparison to 1.97 meters during the same period last year, data from the Water Authority revealed."Such a situation has not been documented since 1927," a statement from the authority said. Last month, the country's northern basins only received 30 percent of what they typically do in February, coastal areas have only received about 10%, according to the data. Despite the shortage of rainfall, Water Authority officials stressed that the country is not expected to experience any shortage of water in quality or quantity, due to advanced preparations undertaken.  (Video: A rare rain shower in Eilat on March 9, 2014.)
ForecastOn Sunday, there will be occasional showers accompanied by isolated thunderstorms and temperatures will drop significantly with a high risk of flash floods in the southern and eastern wadis.Monday will see partly cloudy conditions with an additional drop in temperatures. Isolated showers are expected over the north and center but will weaken during the day. Tuesday will be partly cloudy,  with isolated showers over the north spreading to the center throughout the day. On Wednesday temperatures are expected to be unseasonably cool with occasional rain from the north to the northern Negev, accompanied by isolated thunderstorms.