8-year-old's body found hours after collapse; gas leak is suspected cause of explosion, but police probing possibility of foul play.

By JPOST.COM STAFF
Building collapse rubble in Acre
(photo credit: IDF)
Advertisement
Video courtesy www.newsinsos.co.il Five people were killed and 11 others were injured in the collapse of a building caused by an explosion in the old city of Acre in northern Israel early Monday morning. An initial investigation found that a gas leak caused the explosion, however police were investigating the possibility of foul play. 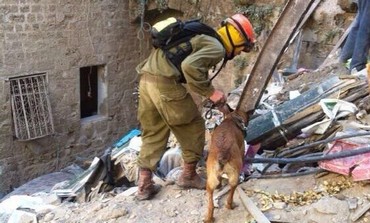 The victims of the collapse were a couple, Rayik Sarhan, 40, Janach Sarhan, 35 and their eight-year-old son Nassar a-Din. Their 10-year-old daughter was lightly injured in the incident. The second couple killed were Muhammad Bader, 43, and Hannan Bader, 39.Khaled Bader, whose brother was killed in the collapse, claimed that the incident was not an accident and called on police to find the truth behind the cause of the blast."There was a murder here. We were threatened that the building would be blown up," Bader said, hours after the explosion. "They threatened us for a long time. My brother was a simple man who never had trouble with the law. And the people who have lately been threatening us caused this terrible murder."Bader called on the police not to believe that the explosion was the result of a gas leak. He said that, following the funerals for the victims, he would reveal the identity of those who had been issuing threats prior to the tragedy.Last month, a family of three was killed when a massive explosion ravaged a Jerusalem apartment minutes after the technician reportedly claimed he fixed a leak.