Most of the women have come to Israel from Eritrea and Sudan say they have escaped repressive regimes, forced labor, genocide and war. 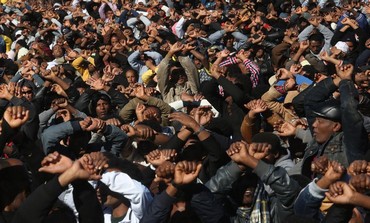 African asylum seekers protest in Jerusalem last week.
Around a thousand African women, many of them single mothers, rallied today with their children in South Tel Aviv's Levinsky Park on Wednesday, marching to the UNHRC headquarters and the US embassy to demonstrate their right to seek asylum. Most of the women have come to Israel from Eritrea, as well as some from Sudan. They say they have escaped repressive regimes, forced labor, genocide and war, with some women having survived torture, rape and ransom demands in Sinai having been caught and held captive on their perilous journey to the Jewish state. Having reached Israel, they say they are now denied refugee status, banned from working, and are struggling to provide for their children or receive basic healthcare and other services.
Last week tens of thousands of African migrants held mass protests in Tel Aviv and Jerusalem, calling on the government to comprehensively examine their asylum requests and to stop arresting them and holding them indefinitely in detention facilities in the Negev.
Advertisement
Subscribe for our daily newsletter