ADL sorts out alt-lite from alt-right

The ADL engages in an alt-right/alt-lite "purity" test. 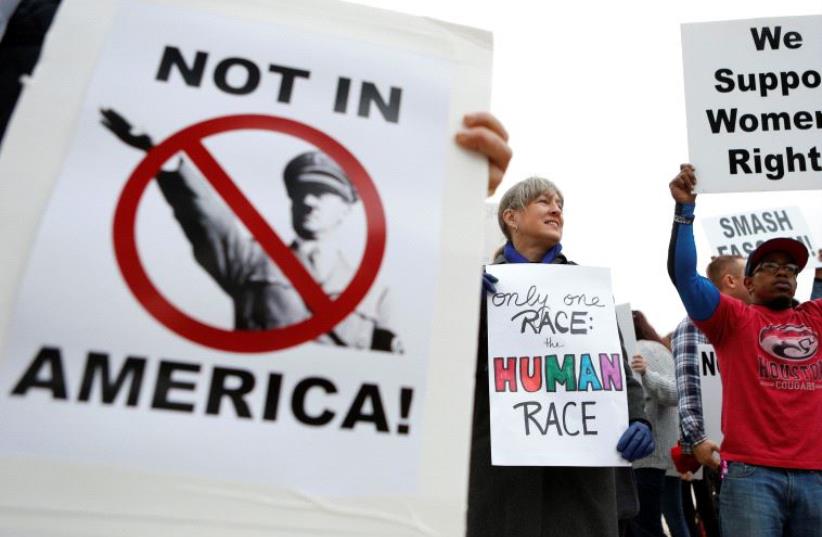 People protest on the day white nationalist leader Richard Spencer of the National Policy Institute is due to speak on campus at an event not sanctioned by the school, at Texas A&M University in College Station, Texas
(photo credit: REUTERS)
Advertisement
The ideology has been around for what seems like forever, but the term is pure 21st century. With their memes and catchy slogans, the alt-right crawled out from internet message boards to take a front-row seat during the 2016 US presidential campaign between Hillary Clinton and Donald Trump. The alt-right grabbed headlines after Hillary Clinton called Trump supporters a "basket of deplorables" and Donald Trump Jr. posted an image of Pepe the Frog, a cartoon that had been hijacked by the alt-right, on social media in response.While most political analysts would argue that they did not have a huge impact in the outcome, many members of the alt-right claim Donald Trump's presidential victory as their own, or as they might call it "winning the meme war."Now that they no longer have to concern themselves with the Trump vs. Clinton, the alt-right now devotes energy to another us vs. them fight. This time: Alt-Right versus Alt-Lite. The term alt-lite is similar to a civic nationalist or a "cuckservative" as some on the alt-right are fond of saying. Basically it means that the person is a right-wing activist, but their ideology is not race-based or antisemitic. However, many alt-liters spit vitriol at feminists, immigrants, Muslims, and other members of "the Left" and promote conspiracy theories like Pizzagate. Members of the alt-lite often call themselves the "New Right."Now the Anti-Defamation League is getting in on the alt-right/alt-lite game.The organization on Tuesday released a guide to the two ideologies called: "From Alt Right to Alt Lite: Naming the Hate."The most well-known member of the alt-right is the movement's self-proclaimed leader Richard Spencer. He founded the web magazine Alternative Right in 2010 and rose to prominence during the Trump campaign. He made news around the world in November 2016 when he spoke at the annual National Policy Institute conference in Washington. Some members of the audience gave the Nazi salute after he said “Hail Trump, hail our people, hail victory!” in his speech.Other members on the ADL's alt-right list include Jason Reza Jorjani, who co-founded altright.com - a website geared to a younger audience - with Richard Spencer; Andrew Anglin, who runs the online media site The Daily Stormer - which is in reference to the Nazi newspaper Der Sturmer; and Mike Enoch who founded The Right Stuff, another alt-right online presence, and hosts the Daily Shoah podcast which incorporates many antisemitic conspiracy theories. Enoch, born Mike Peinovich, gained attention when a doxxing incident showed that his wife has Jewish ancestry.The most notable member of the ADL's alt-lite is Milo Yiannopoulos. Like Spencer, he rose to prominence during the 2016 US presidential campaign. The former Breitbart senior editor fashions himself the "world's most fabulous supervillain.” Yiannopoulos has gained a massive fan base with his outlandish, controversial statements and antics. Milo often verbally attacks feminists, transgender people, Muslims, and Black Lives Matters activists. His 'troll army' also engages in verbal and "meme" attacks -- the most famous of which is the Twitter attack against Leslie Jones of The Ghostbusters remake. After some of his followers made racial and sexist slurs, Twitter banned him. He had previously been suspended by Twitter in June 2016 after he criticized Islam after the Orlando Pulse nightclub shooting.Other members on the ADL's alt-lite list include Mike Cernovich, who contributes to Alex Jones' Infowars and is a prominent Pizzagate conspiracy theorist; and Gavin McInnes, Vice magazine co-founder (though he left the magazine in 2008) and current contributor to Rebel Media, a Canadian right-wing media outlet. McInnes garnered controversy when he made a video called "10 Things I Hate About Jews," afterward changing it to "10 Things I Hate About Israel." Hebrew sounding like "spit talk," Israelis having a "whiny paranoid fear of Nazis" which makes them scared of Christians and Trump who "are their greatest allies," and Jews not being grateful enough to the US for defeating the Nazis made the list. “Sorry we didn’t do it in time, but we still saved you." He is considered alt-lite because he does not engage in Jewish world control conspiracies or Holocaust denial. He is an advocate of "Judeo-Christian values" above all else.Whichever term people use, both ideologies will likely continue to play a significant role both on- and off-line for a long time to come.