Aly Raisman is the most famous Jewish athlete, according to ESPN

Raisman will be 26 when the 2020 Olympics kick off in Tokyo, but she’s planning to compete again. 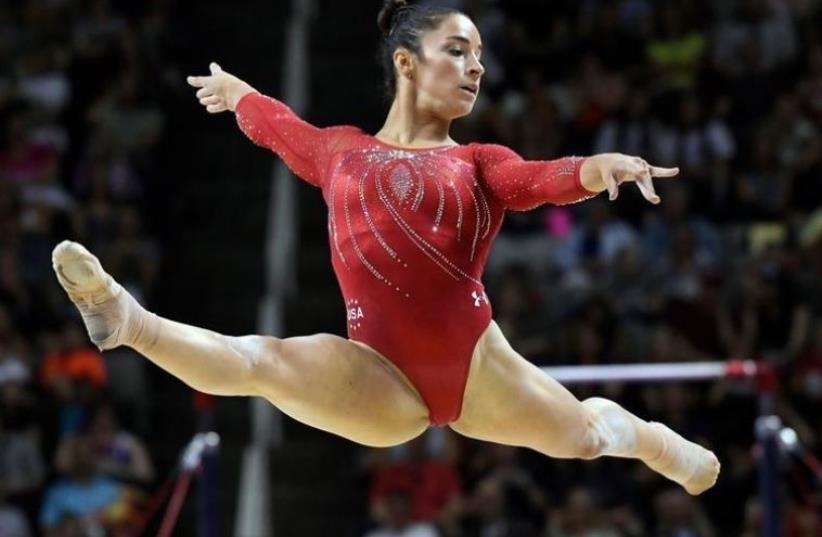 Aly Raisman
(photo credit: REUTERS)
Advertisement
Three Olympic gold medals. Six total. Captain of the victorious 2012 and 2016 US women’s gymnastics teams.Now Aly Raisman can add one more accolade to her list: Most famous Jewish athlete in the world.Raisman, 23, the two-time US Olympian from Massachusetts, is the only Jew on ESPN’s 2017 list of the 100 most famous athletes worldwide. She sneaked in at number 99, immediately below Aussie golfer Adam Scott (not the guy who plays Ben in “Parks and Rec”), and above Mohamed Salah, an Egyptian soccer player for the Italian team Roma.Raisman is one of only eight women on the list, which includes her US gymnastics teammate Simone Biles (#48), martial artist Ronda Rousey (#16) and tennis pros Serena Williams (#19) and Maria Sharapova (#23).Cristiano Ronaldo, the Portuguese soccer icon, topped the list. LeBron James, the basketball superstar now gunning for another NBA championship with the Cleveland Cavaliers, was number two.Raisman won her first Olympic golds as an 18-year-old in 2012, and won our hearts by performing her first-place floor exercise to the tune of Hava Nagila. Her adorably anxious parents, Lynn and Rick, only added to her Jewish charm.Raisman took home two golds in 2012 — for the team win and floor exercise — as well as a bronze for the balance beam event. In 2016, she was nicknamed “grandma” for being the team’s oldest member — at 22. But age didn’t stop her. Raisman won three more medals that year: a gold for the team win, and two silvers for all-around and floor exercise.Raisman will be 26 when the 2020 Olympics kick off in Tokyo, but she’s planning to compete again. If she wins two more medals, for a total of eight, she’ll break the all-time record for US women gymnasts.ESPN calculated the rankings by looking at endorsement money, social media following and Google search results. Raisman has a paltry $450,000 in endorsement deals (by comparison, LeBron does $55 million in endorsements), but she boasts 2.2 million followers on Instagram and nearly a million on Twitter.She has also excelled outside of the arena. Raisman placed fourth on ABC’s “Dancing With the Stars” in 2013, and she can do a mean box jump.