Gossip Cop, which says it polices Hollywood and celebrity news to separate what’s real from rumor, slammed the tweet. 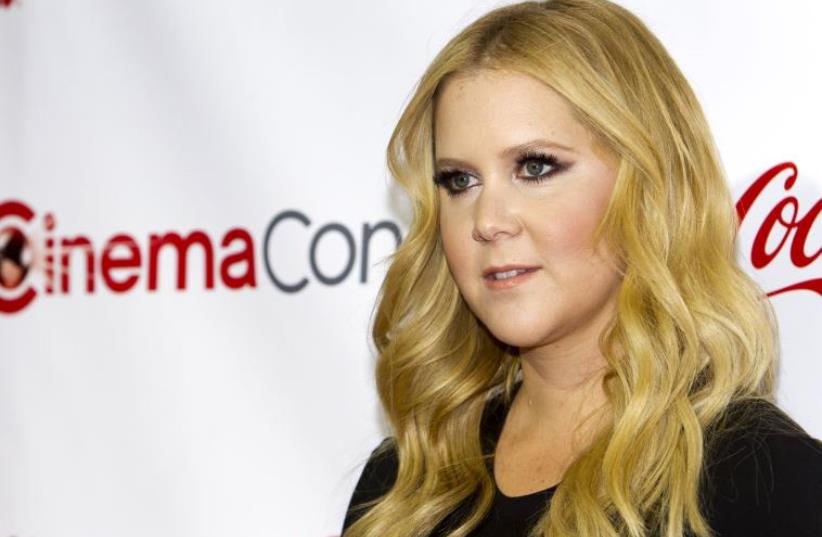 Actress Amy Schumer poses during the CinemaCon Big Screen Achievement Awards at Caesars Palace in Las Vegas
(photo credit: REUTERS)
Advertisement
Jewish comic Amy Schumer tweeted a Jewish joke criticized as “offensive and wrong” by the Gossip Cop website.In a Twitter post Wednesday, the comedienne and actress made public a photo of herself standing between a clarinetist and a saxophonist, each holding his instrument. Her caption read “A Jew with horns.” She later amended the phrase to “I meant to say a Jew with 2 horns.Gossip Cop, which says it polices Hollywood and celebrity news to separate what’s real from rumor, slammed the tweet.“While comedy can provoke discussion, it’s purpose is not to perpetuate hateful and inaccurate stereotypes. And Schumer’s Twitter message, which plays off the misconception that Jews are horned creatures, accomplishes less comically than it does to reignite misguided prejudice,” the site’s commentary read.

A Jew with horns pic.twitter.com/5v3JUHZenN

“Undoubtedly, Schumer will justify her mildly amusing ‘joke’ by noting that she herself was raised Jewish and can poke fun at herself, as she often does with her comedy. But does that make it okay for her to spread untrue and hurtful stereotypes about Jews? Would jokes by a popular black or Latino comedian be considered funny if he or she tweeted to their millions of followers a wholly and historically painful stereotype about their people for non-minorities to laugh at?”Gossip Cop staff called on Schumer to “grab her tweet by the horns and apologize for perpetuating this slanderous depiction of Jews for a mere half-laugh.”