Arabella Kushner would rather be Israel than an ant 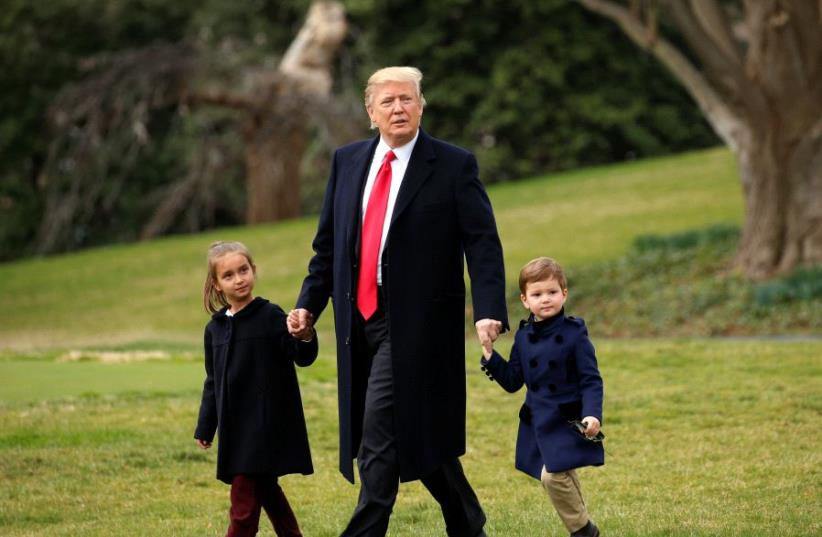 U.S. President Donald Trump holds hands with grandchildren Arabella and Joseph Kushner
(photo credit: KEVIN LAMARQUE/REUTERS)
Advertisement
Don't worry, we don't know what that means, either. The Israel revelation was part of an adorable questionnaire that Arabella's mom, Ivanka Trump, posted on Twitter on Friday.Arabella's student spotlight interview was conducted last Thursday at the Jewish Primary Day School in Washington, DC. Not averse to being in the spotlight as the granddaughter of US President Donald Trump, Arabella gracefully handled her fellow students' questions.

The interview began with a softball question from Sarit - "If you were one flavor of ice cream, what would you be?" Arabella answered with "mint chocolate chip," a truly bipartisan response.Heating things up was Lee-or, who followed up Sarit with a question of astronomical proportions. "If you were a star, what kind of star would you be?"The daughter of Ivanka and Jared Kushner, both observant Jews, replied that she would be a Star of David.Arabella also said her favorite holiday was Hanukkah, "because I get presents!"


The interview revealed some remarkable facts about the 5-year-old. Her favorite color is rainbow, her favorite food is ice cream (of course!) and, like most children her age, she has become enamored with fidget spinners.There were no signs of fake news at this press conference, though some of the questions were odder than others. Jonas, for example, asked Arabella how many worms would she eat per day if she were a bird. Kushner didn't dodge the off-beat question, however, giving a concrete answer of "1,000."Delving into foreign policy, Zachary asked Arabella the aforementioned "If you could be Israel or an ant, what would you be?" It is unclear if the young interviewer meant the country or a classmate's name, but at any rate, Arabella wisely chose to be Israel. Though we agree that ants are pretty cool, too.

Moving on to domestic policy, Arabella clearly agrees with her grandfather's America First stance as she quickly responded with "America" when asked what her favorite country is. She also believes in a strong military as she wants to join the Marines when she grows up.Arabella may want to look into taking over Sean Spicer's job instead, because she handled the spotlight interview like a champ.The Jewish Primary Day School was crowned "the place to be for kids of Washington's politically connected Jews" by Tablet Magazine in April 2013. Alum of the school include the children of former White House Chief of Staff and current Chicago mayor Rahm Emanuel and his wife Amy, as well as the daughter of former senator Joe Lieberman and his wife Hadassah.