It is not surprising that in the 20th century many prominent rabbis asserted that such behavior would be entirely prohibited in our times. 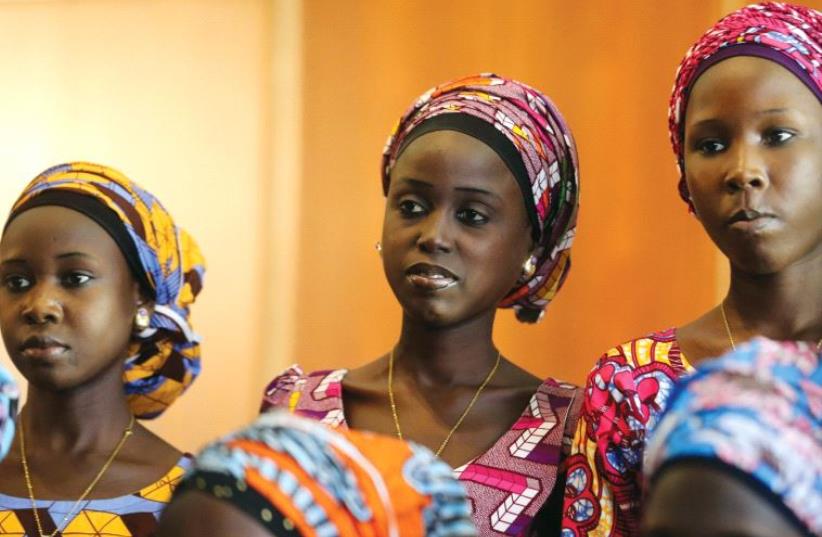 Some of the 21 Chibok schoolgirls released by Boko Haram look on during their visit to meet President Muhammadu Buhari in Abuja, Nigeria, on October 19
(photo credit: REUTERS)
Advertisement
From Yazidi women tortured by Islamic State to Nigerian girls captured by Boko Haram, sexual slavery and forced marriage have become regular headlines. The dreadful combination of religious fundamentalism and sexual violence has also drawn attention to a biblical passage (eshet yefat to’ar) that seemingly allows Israelite soldiers to take a captive woman as a wife. The passage comes within a larger set of laws in Deuteronomy that regulate warfare, including the prohibition of destroying fruit trees and the obligation to allow enemy soldiers to flee a besieged city. In this context, the passage is striking: “When you take the field against your enemies, and the Lord your God delivers them into your power and you take some of them captive, and you see among the captives a beautiful woman and you desire her and would take her to wife for yourself, you shall bring her into your house, and she shall shave her head and do her nails and discard her captive’s garb.She shall spend a month’s time in your house lamenting her father and mother; after that you may come to her and possess her, and she shall be your wife. Then, should you no longer want her, you must release her outright. You must not sell her for money: you must not enslave her, since you had your will of her.”As Philo of Alexandria noted in the first century, the regulations display some pity on the captured woman whose fortune has radically changed: she is allowed a mourning period for her family, she is given the full status of a wife, and if no longer desired, she must be released and not sold like a slave. Yet her relatively gentle treatment only further begs the question: why allow this in the first place? Admittedly, Jewish law issues certain dispensations to wartime soldiers, such as eating non-kosher food and violating Shabbat. Yet why allow another human being to be treated as wartime spoils with behavior that violates Jewish sexual norms and has serious long-term implications? Within rabbinic literature, the dominant answer was that the Torah was trying to severely deter the entire phenomenon through a burdensome yet plausible process that would prevent captive women from being treated as slaves. As the Sages put it, “The Torah was addressing the evil inclination.” Recognizing the antinomian urges on the battlefield and the corrupting power of aggression, the Torah sought to initiate a process so the soldier would steadily recognize that this route would, in effect, entail marriage. Thus the regulations preventing the woman from being treated as a chattel would, in the words of Gersonides, “subdue the passion for the captive woman, since he knows that he will have to abdicate any power he had over her.”For similar reasons, the Sages also asserted that the Torah would not allow hoarding women for one’s family members. Similarly, the Sages emphasized that such a marriage would lead to negative consequences, including the prospects of despised wives and rebellious children.Beyond trying to eliminate the lures of dominion, the rituals undertaken during the 30-day mourning period were understood by many commentators as a “cooling- off period” that would temper the warrior’s sexual lust. During this time period, moreover, the woman was converted. According to Nahmanides, this could be against her will. Maimonides, however, asserted that the woman could refuse to convert, and after 12 months, she could accept the seven Noahide laws and then be freed.Most significantly, no sexual relations could take place during this period at all.Some Babylonian sages, followed by Maimonides, asserted that coitus could take place (in private) at the time of battle. The possibility of coerced intercourse certainly bothered other talmudic figures who, later joined by Nahmanides, believed that the Torah prohibited sexual relations entirely until the 30-day period was completed.Especially according to this latter opinion, the Torah was attempting to severely curtail the entire phenomenon of sex with captives.In the beginning of the 20th century, Rabbi Meir Simha of Dvinsk innovatively suggested that the entire dispensation would only be allowed if no Jews remain in captivity from battle. Otherwise, a reciprocal prisoner swap would be demanded at the cessation of warfare, and it would certainly be unfathomable to leave a comrade in captivity because a fellow warrior had detained a beautiful woman. This novel interpretation would all but eliminate the possibility of taking an eshet yefat to’ar, given the unlikelihood of no Jewish soldiers being taken captive.Ultimately, the Jewish interpretative tradition, taken as a whole, felt unease with the entire phenomenon of eshet yefat to’ar. While some reluctantly allowed such behavior, they clearly viewed it as a concession (and hopeful deterrent) to unwanted behavior. It is therefore not surprising that in the 20th century, rabbis Abraham Kook, Ahron Soloveichik, and Nahum Rabinovitch asserted that such behavior was tolerated during earlier eras but would be entirely prohibited in our times. Indeed, a bedrock of contemporary Jewish sexual and military ethics prohibits such treatment of women, allies and enemies alike. The writer teaches at Yeshivat Hakotel and directs the Tikvah Israel Seminars for Post- High School Students. [email protected]