Ask the Rabbi: Is revenge a Jewish value?

Divine vengeance should not be confused with the rash, impulsive nature of human wrath which can be rooted in raw emotions, not rational judgment. 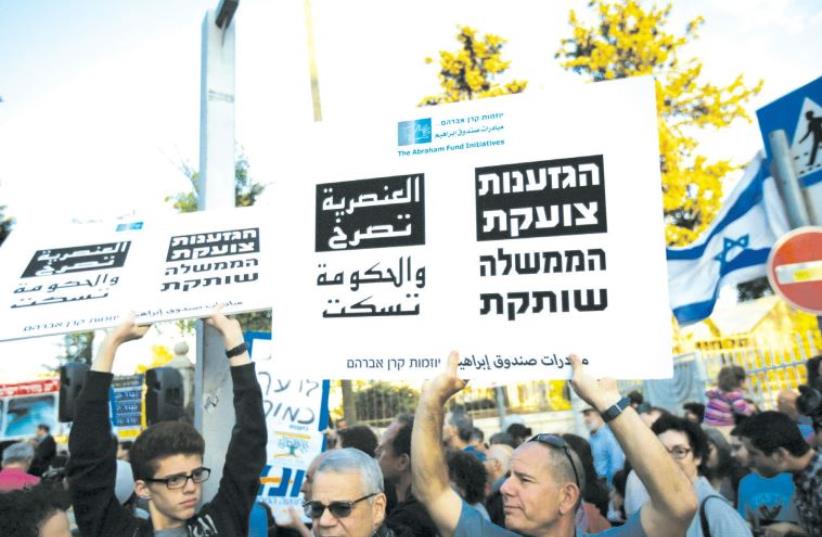 Christians, Muslims and Jews take part in a protest in Jerusalem against attacks by suspected far-right Israelis, May 2014
(photo credit: REUTERS)
Advertisement
Ostensibly, one might claim that the Bible clearly shuns vengeance through its direct prohibition against taking revenge (nekama): “You shall not take revenge or bear a grudge – love your neighbor as you love yourself” (Leviticus 19:18).The Sages applied the prohibition to situations where people refuse to offer basic ﬁnancial courtesy (e.g. lending a tool) to another person, because the latter had previously refused the same courtesy to them. Medieval scholars debated whether this prohibition of retaliation would also apply in cases where someone had verbally insulted them; they also discussed whether we can demand that people feel no sense of vengeance, even at the time of insult.Significantly, the Sages did allow such forms of vengeance if it served some greater educational purpose, and was done with purity of heart – undoubtedly a difficult threshold to meet. Moreover, this prohibition does not prevent a person from seeking reparations, such as tort damages.Be that as it may, the Talmud greatly praises those who are unjustly insulted or reproached but remain silent and suppress the temptation for revenge. Subsequently, many pietistic texts preach the importance of shunning vengeful feelings while offering tips to avoid these natural inclinations.Yet careful readers of the Bible will note there are a plethora of verses that seem to celebrate the prospect of revenge. Regarding the future punishment to the nation of Edom, Isaiah proclaims, “The Lord has a sword, it is sated with blood… for it is the Lord’s day of retribution” (34:6-8). In Deuteronomy, we similarly ﬁnd, “O nations, acclaim His people! For He’ll avenge the blood of His servants, wreak vengeance on his foes…” (32:43).Most prominently, the Psalmist prays, “God of retribution, Lord, God of retribution – appear!” (94:1).Within biblical narratives, God enjoins Israel to partake in His vengeance against the Midianites (Numbers 31:2), with the midrash further elaborating that their participation was appropriate because the Jewish people had suffered at their hands for being God’s chosen people.As Rabbi Shlomo Ephraim Luntschitz (d. 1619) noted, it seems clear that the prohibition against revenge only applies to our brethren but not to hated enemies.This vengeful sentiment is further expressed in Jewish law and liturgy. In the Avinu Malkeinu prayer, Jews beseech God to “avenge before our eyes the spilt blood of Your servants.” Jews killed by gentile enemies are customarily buried in their bloody clothing, scholars explain, in order to arouse God’s wrath toward revenge.As Rabbi Yaakov Ariel has passionately argued, the Bible apparently understands God’s vengeance as the ultimate manifestation of justice in this world. “The righteous man will rejoice when he sees revenge… There is, then, a reward for the righteous; there is, indeed, divine justice on earth” (Psalms 58:11-12). The promise of and prayer for His vengeance, therefore, reflects the belief that evildoers will ultimately be punished for their sins, and the enemies of the Jewish people will suffer for their centuries of vicious hatred.Divine vengeance should thus not be confused with the rash, impulsive nature of human wrath which can be rooted in raw emotions, not rational judgment. When executed thoughtfully and properly, however, even human retribution can be a form of justice. As such, the Bible demands vengeance for one of society’s potentially ignored members, the Jewish servant, who has been struck dead by his owner (Exodus 21:20). Willy-nilly, the emotional call for vengeance is what sometimes propels the enactment of justice in this world.The ambivalence toward human vengeance was well-reﬂected in a talmudic embellishment of a central scene in the Purim story. According to the Talmud, Mordecai kicked Haman while using him as a ladder to climb onto his parade horse. Haman challenged this triumphalism by citing the biblical aphorism, “Do not rejoice when your enemy falls” (Proverbs 24:17). Yet Mordecai responded, “That only applies to Jews, but with regard to your people, the Torah states, ‘And you shall tread on their high places.’” Many commentators noted that such joyful triumphalism is allowed only with the downfall of evil and national enemies, yet not in cases of personal rivalries or matters of lesser importance.With the wave of attacks by Palestinian terrorists against Israelis, there have been some incidences of nationalist violence. On October 9, an Israeli teenager in Dimona stabbed and wounded three Palestinians and a Beduin man in an apparent revenge attack. On Tuesday, an Israeli man in Kiryat Ata stabbed a Jewish man who he thought to be Arab, an initial police investigation called it a “failed revenge attack.” Such brutality has nothing to do with the biblical notion of vengeance, and must be shunned and condemned by God-fearing seekers of peace and justice.In contrast, the calculated elimination of the two terrorists by the Israeli army, following the responsible decision of the political echelon, was much more in keeping with biblical notions of vengeance and justice. As the Bible states, “When evildoers are destroyed, there is joy” (Proverbs 11:10).In our imperfect world, humans must join the divine mission of rooting out evil and bringing justice to the world. But we must remain watchful that our actions stem from calculated judgments of justice, and are not rash expressions of pain and anger.Striking the proper balance is a difficult task, yet will ultimately make our country a holy nation.

The writer directs the Tikvah Overseas Seminars, teaches at Yeshivat Hakotel and is a junior research fellow at the Israel Democracy Institute. He recently published A Guide to the Complex: Contemporary Halakhic Debates (Maggid Books), an anthology of his ‘Ask the Rabbi’ columns.
Advertisement
Subscribe for our daily newsletter