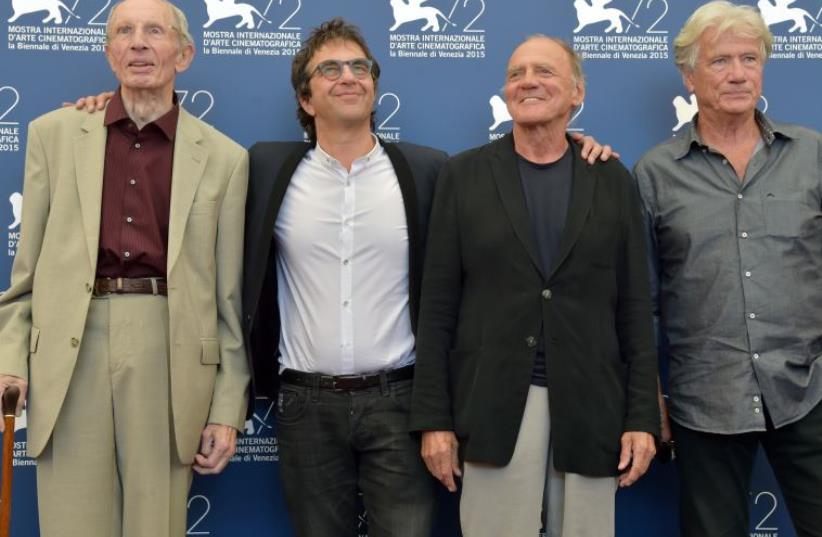 From left : Actor Heinz Lieven, director Atom Egoyan, actor Bruno Ganz and actor Jurgen Prochnow pose during the photocall of the movie "Remember" at the 72nd Venice International Film Festival
(photo credit: TIZIANA FABI/AFP)
Advertisement
Christopher Plummer plays an Auschwitz concentration camp survivor searching for a camp guard living incognito in North America in a film its Canadian director said on Thursday had to be made now, while some Holocaust survivors remain alive.In Atom Egoyan's "Remember", competing for the top prize at the Venice Film Festival, Plummer, 85, plays Zev, a dementia-stricken resident of a Jewish home for the aged.At the behest of wheelchair-bound resident Max (Martin Landau), and as a promise to his dead wife Ruth, Zev sneaks out one night on a cross-continental quest to find the concentration-camp guard -- and to kill him with a Glock pistol."It's an examination between the loss of memory through age but also the loss of memory through trauma. Because we understand that what's really fuelling this story is not memory loss, Alzheimer's, it's trauma and we begin to understand the full depth of the story as the journey progresses. It seems very simple at the beginning and then it becomes more and more loaded with the ghosts of history," Egoyan told Reuters in an interview."It's very important to understand that even though we all would love to live with the cliché that time heals wounds and that there is the possibility of rapprochement but there are a lot of people who live with rage. There are a lot people who are still as angry as though it was yesterday. It's provocative but I also think it's very true to see that as this generation is about to disappear that there is still that feeling of the intensity of the violence, the intensity of race hatred because we are still seeing this still in the present day. We have not, as human beings, learned anything," he added.The film sees Egoyan reunite with Plummer, whom he described as the "Stradivarius" of actors."I think Christopher Plummer is really one of the greatest living actors. I have had the privilege of working with him before but I've also become a friend, we've done live interviews, I've seen him on stage many times, he is a wonderful stage performer. He is of this tradition of classically trained actors who can do anything and what he is doing here is quite radical. He is playing a character entirely in present tense, there's no subtext at all, which is unusual for an actor because he's just like a child, just reacting to things in the present. And yet, given the incredible history he carries this becomes quite shocking at a certain point," said Egoyan.Plummer, whose most famous role may well have been Captain Von Trapp in "The Sound of Music" (1965), was not in Venice for the premiere but said via a video link to a press conference that he'd been intrigued by the character of Zev, whose memory fades in and out."No, no, all I heard was that the film had a series of very old men in it. And I was rather offended by that," Plummer first joked."Oh, it was not easy, let me tell you because I've never done anything like this in my life before. I've always played, although I've played a lot of different people, they've all had great confidence and great authority and some even royal. So, Zev, being such an ordinary man, and I was dying to play a really ordinary man, a simple, intelligent and educated man, but who was very introverted to say the least and it was something very foreign to me, I was dying to accept the challenge," he said.In order to carry out his mission, Zev reads instruction in a letter given him by Max, who by telephone from New York arranges everything for the forgetful Zev, from limousines when he arrives by train in Ohio, to hotel rooms in Canada, Idaho and California on his quest to identify one of four people, all living under the same name, as the actual camp guard.German actor Jurgen Prochnow said it was important that the film was made, to help keep the memory of the Holocaust alive and to educate younger generations."I think it's very important, I think we never should forget what happened and there are always stories told from different angles about the past, about this special past in Germany and I think it should always be remembered I think," he said.The film won mixed reviews in the trade press, with Variety praising Plummer's performance but describing it as a "state-hopping Nazi-hunt mystery that puts a creditably sincere spin on material that is silly at best"."Remember", which received its world premiere in Venice, will also screen at the Toronto International Film Festival (TIFF).