Chocolate desserts are very hard to resist, especially when they are made from high-quality ingredients. 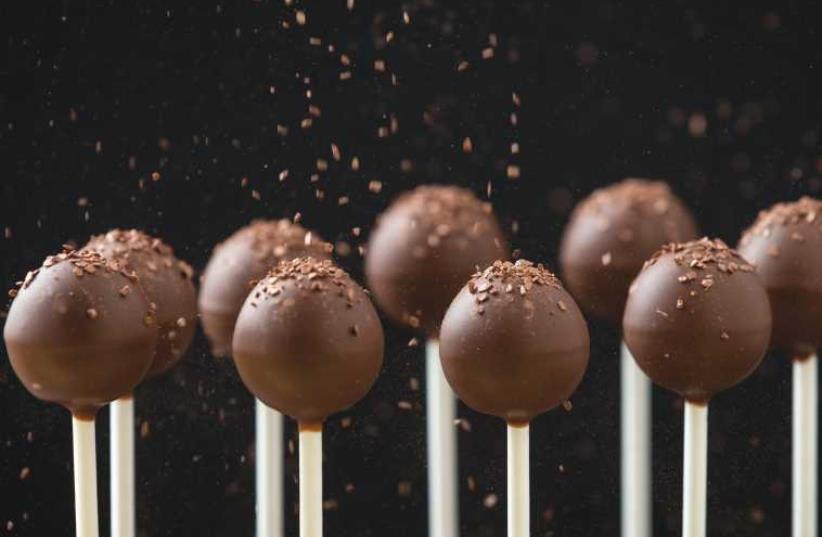 Caramel and walnut chocolate lollipops
(photo credit: Courtesy)
Advertisement
In 1922, artisan pastry chef Albéric Guironnet opened a chocolate factory, the Chocolaterie du Vivarais, in Tain l’Hermitage, France. It is known today as Valrhona.Planter, selector and blender, Valrhona has cultivated a passion for rare, highquality cocoa beans around the world: the origins of exceptional chocolate. As opposed to current practices, Valrhona does not buy its cocoa at random from fluctuating and erratic markets but rather involves itself at the source of cocoa production.To Valrhona, the notion of origins is not a quality in itself unless it is determined by the strict demands born of a passion for taste. The taste of Valrhona products is acknowledged as exceptional by both professionals and chocolate gourmets. For more than 15 years, Valrhona has built up a data bank, recording information about the taste and flavor of each variety of cocoa analyzed. It is from these data that the chocolates of the future can be assembled, along with the pure origins.Imported to Israel by Tishbi, Valrhona chocolates are available at the Tishbi Winery shop and the online shop, as well as gourmet delicatessens. Taste is the fundamental criterion for quality at Valrhona, and the sensorial analysis laboratory is one of the most exclusive in the profession.More than 160 people from the chocolate-making industry constitute the tasting juries for raw materials, products in the course of development or finished products.The following recipes, using Valrhona chocolates, were prepared by pastry chef Sarah Kosikowski for Tishbi.
DARK CHOCOLATE CUPCAKES
Makes 18-24 cupcakes, depending on sizeFor the batter:
✔ 1 cup hot coffee
✔ ¼ cup + 2 Tbsp. cocoa powder
✔ 1 cup 3% milk
✔ 1 cup canola oil
✔ 2 eggs
✔ 1½ cup + 1 Tbsp. granulated sugar
✔ 1 tsp. baking powder
✔ 1½ tsp. baking soda
✔ 1 tsp. salt
✔ 2¼ cups flour For the dark chocolate ganache:
✔ 1¼ cup cream
✔ 2½ Tbsp. corn syrup ✔
200 gr. dark chocolate

To prepare the ganache: Melt the chocolate in a double boiler or a microwave oven. If using a microwave, melt the chocolate in intervals of 30 seconds until completely melted. Be careful not to burn the chocolate. In a saucepan, heat cream and corn syrup until hot. Add the cream mixture to the chocolate in three stages while stirring to create a smooth cream. Allow mixture to set overnight or until spreadable.
To prepare the cupcakes: Heat oven to 180º. Sift together all the dry ingredients. Combine milk and oil in a bowl. In a separate bowl, whisk the coffee and cocoa powder to dissolve. Add the milk and oil to the mix. Add the eggs, and then fold in the sifted dry ingredients. Beat until smooth. Line a cupcake pan with paper liners and fill 2⁄3 full with batter. Bake for 10-15 minutes, depending on the size of the cupcakes. When cupcakes are cooled, spread the ganache on the cupcakes with a knife or use a piping bag and decorating tip.
CHOCOLATE BROWNIES ✔ 230 gr. butter
✔ 130 gr. dark chocolate
✔ 3 large eggs
✔ 280 gr. sugar
✔ 1 vanilla bean
✔ 430 gr. flour
✔ ½ cup chopped walnutsIn a microwave-safe bowl, melt the dark chocolate and the butter together in intervals of 30 seconds. Whisk the eggs with the sugar and vanilla until all the sugar is fully incorporated. Add the chocolate and butter mixture to the eggs and sugar mixture, and mix until smooth and homogeneous. Add the sifted flour in 2 to 3 times and mix well with a wooden spoon until all the flour is incorporated into the mixture. Add the chopped walnuts and mix well. Pour the batter into a greased 22 cm. cake pan. Bake at 160° for 20 to 30 minutes. If not baked through, bake another 5 minutes. Let cool and cut into portions.
DEREK’S IRRESISTIBLE COOKIES
Makes about 24 cookies, depending on size✔ 4 1⁄3 cups (540 gr.) flour
✔ 2 tsp. salt
✔ 2½ tsp. baking soda
✔ 370 gr. butter
✔ 1½ cup (310 gr.) packed light brown sugar
✔ 1 cup (225 gr.) granulated sugar
✔ 2 eggs
✔ ½ tsp. vanilla extract
✔ 200 gr. chocolate, chopped with a knife Using a mixer with a paddle attachment, cream the butter with both sugars until light and fluffy. In a separate bowl, mix together eggs and vanilla extract. Gradually add to the butter mixture to the mixer bowl on slow speed, scraping the bowl after each addition. Sift the flour, salt and baking soda together. Add the dry mixture to the wet mixture and mix just until dough begins to come together. Add in the chopped chocolate and mix briefly, only enough incorporate the chocolate. Form the dough into about 24 small balls and place on a baking sheet lined with parchment paper or on a silicone mat. Bake at 180° for 8 to 12 minutes or until light golden brown on the edges. Let cool and store in an airtight container.
BOURBON WHISKEY TRUFFLES✔ 120 gr. whipping cream
✔ 200 gr. Valrhona baking dark chocolate, chopped
✔ 20 gr. butter
✔ 30 gr. Bourbon In a small pot over medium heat, bring the cream to a boil. Pour 1⁄3 of the cream over the chopped chocolate and quickly mix while cream is still hot, using a spatula, until texture is smooth and glossy. Gradually add the remaining cream, mixing all the time to keep texture smooth and glossy. Continue mixing until the chocolate is completely emulsified. Stir in softened butter and mix thoroughly. Add the Bourbon and stir. Refrigerate the ganache, covered until set, about 12 hours. Place the ganache in a piping bag and shape into small balls on the greaseproof paper. Roll ball between your hands to make a regular shape. To finish off, roll each truffle in cocoa powder.
CARAMEL AND WALNUT CHOCOLATE LOLLIPOPS
✔ 1 cup sugar
✔ 1 cup cream
✔ 1 vanilla bean
✔ 100 gr. dark chocolate, chopped
✔ 30 gr. baking milk chocolate, chopped
✔ 1 Tbsp. butter
✔ 1 cup walnuts, chopped
✔ Additional dark chocolate for dipping
✔ Lollipop sticks Mix the two chocolates in a bowl. In a small pot over medium heat, cook the cream together with the vanilla bean until almost boiling. To prepare the caramel:In a small pot, place sugar and add just enough water to wet it and form a sand-like consistency. Make sure the sides of the pot are clean and there is no sugar sticking to the sides. Place the pot over medium heat and cook without stirring until caramel is dark in color. Remove the vanilla bean from the cream and very carefully pour the hot cream onto the caramel little by little (watch out for splatter). Bring the caramel mixture to a boil and cook for about 5 to 7 minutes. Remove from heat and pour the caramel over the chopped chocolate. Add the butter and vigorously mix until mixture becomes smooth and shiny. Add the walnuts and immediately pour into a silicone pan. Let harden for 12 hours in the refrigerator Remove from pan onto a cutting board. Cut circles with cutter and insert the lollipop sticks. Melt chocolate and dip lollipops in to coat them. Recipes and photos are courtesy of Tishbi Wineries, importers of Valrhona Chocolate to Israel. Tishbi is located on Route 652, between Zichron Ya’acov and Binyamina. Tel: (04) 628- 8195. www.tishbi.com
Advertisement
Subscribe for our daily newsletter