The businesses in the city center have joined together with the help of Eden (Jerusalem’s Center Development Company) to create cultural business districts to attract us back to the city center. 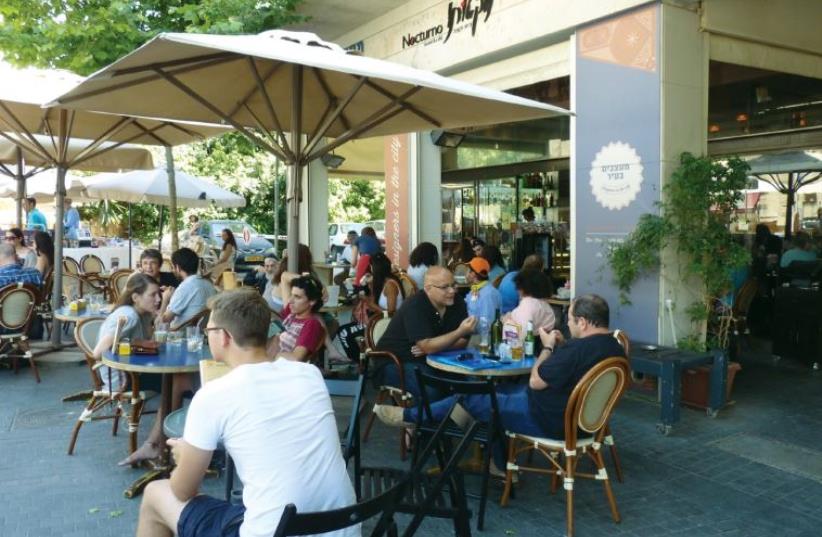 Nocturno Restaurant, at the top of Bezalel Street.
(photo credit: COURTESY NOCTURNO)
Advertisement
For those of us who remember a Jerusalem before Mamilla Mall, First Station and Cinema City, we remember that the vibrant city center was the place where tourists and locals gravitated to in order to shop and eat.Over the years many new options have opened up around Jerusalem, and competition for our attention has heightened. As a response to this, the businesses in the city center have joined together with the help of Eden (Jerusalem’s Center Development Company) to create cultural business districts to attract us back to the city center.One of the areas that has recently caught my attention is the Bezalel/Shatz district, which hosts a weekly art fair on Fridays.Wanting to learn more about the revival of this pedestrian mall, I sat down with Nitza Shechter, the head of the board of the Bezalel/Shatz district and PR for the Nocturno Restaurant at the top of Bezalel Street. Over a cup of iced coffee and a delicious lentil vegetarian burger, Shechter gave me the “back story” and even a few hints about some of the future plans for the area.The area, which is adjacent to the Bezalel Academy of Arts and Design, is a pedestrian mall known for fashion, design and great food. Although the store and restaurant owners run their businesses privately, they recently got together to form an organization to create joint ventures to encourage tourists to come to their district.Some of these activities include the Friday art fair as well as evening events along the shared outside spaces.The Bezalel/Shatz area is unique in the city because of its mix of fashion, jewelry and charming restaurants lining the street.The street connects visitors to the Bezalel Academy by giving the graduates a place to show off their crafts.Located inside the Nocturno Restaurant is the Designers in the City complex. With the backing of the Eden Company, the complex has created a cultural experience for tourists and residents to meet young artists in their studios and see their crafts.This incubator gives artists a place to start to build their brand and following in a warm and supportive environment.As Shira Gropper Perez of Sheeebz fashion accessories told me, “Designers in the City gives me great exposure to new customers while I work and create. It is a place to which I can invite my online customers to meet me and it is a great, creative and fun environment to work in with other designers.”The store owners on Bezalel/Shatz along with Eden have created a win-win cultural experience in their district.I was so inspired that next week I plan to take my kids to Nocturno for a culinary open kitchen experience and spend the afternoon at an origami workshop with one of the artists from Designers in the City. Visits to the complex do not require a reservation, unless you would like to arrange a hands-on workshop for kids and adults.My conversation with Shechter then shifted to another popular district in town called Nahalat Shiva. This summer it has become one of the most visited sites in the city center, with the umbrella installation on Yoel Salomon Street. Multicolored umbrellas with the Super-Pharm “Life” logo have been hung above the street to create a canopy of color and shade.Quickly becoming this summer’s most popular selfie spot in Jerusalem, tourists and residents are attracted to the area and drawn in from Zion Square. People of all ages are enticed to walk down Yoel Salomon Street. The installation has encouraged thousands of selfies and social media posts, and ultimately it increased sales in the local shops by 40 percent.Shechter described how the umbrellas created a cohesive space and a place where visitors feel part of the Nahalat Shiva district. Visitors have been encouraged to sign up for the district membership card entitling them to special offers, a digital magazine about the area and special event information.Shechter and her district members hope to replicate this idea in their own unique way for the Bezalel/Shatz district. One thing is for sure: There is a great buzz in downtown Jerusalem. • Bezalel/Shatz August events: Wednesdays 9 p.m. – Jerusalem Jazz Performers at Nocturno Fridays 8 a.m. to 4 p.m. – Bezalel Street Fair Designers in the City Monday-Thursday 10 a.m. to 2 p.m., 4 p.m. to 7 p.m.Friday 10 a.m. to 2 p.m.Nocturno (dairy, vegetarian and vegan) Wares on offer at the Friday art fair in the Bezalel/Shatz district. (Courtesy Nocturno) 7 Bezalel Street 077-700-8510 Kashrut: Jerusalem Rabbinate Sunday-Thursday 7 a.m. to 1:30 a.m.Friday 7 a.m. until 1 hour before Shabbat begins Saturday – From half an hour after Shabbat ends until 1:30 a.m.The writer was a guest of Nocturno Restaurant.Joanna Shebson is the Founder and FUN Expert at Fun In Jerusalem (www.funinjerusalem.com). She lives in Jerusalem with her husband and three kids and loves to inspire family fun. You can reach her at [email protected]