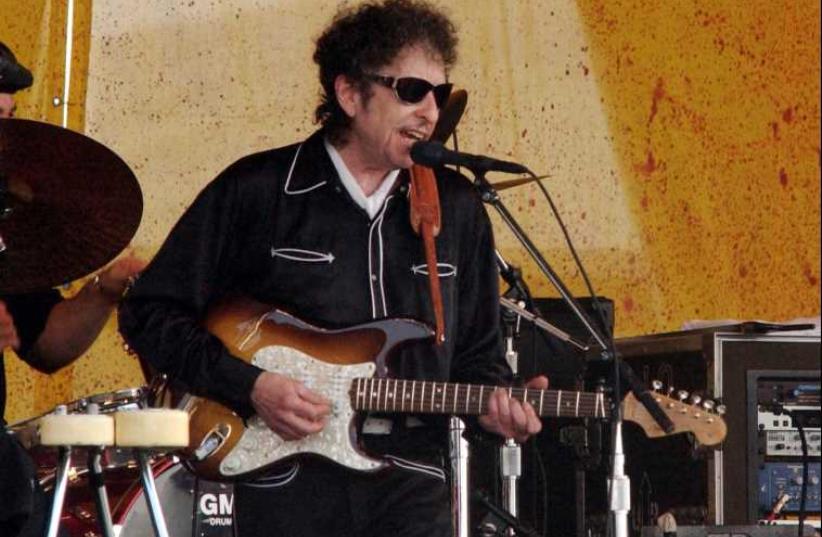 Bob Dylan performs with his band at the 34th annual New Orleans Jazz and Heritage Festival, April 25, 2003.
(photo credit: REUTERS)
Advertisement
“I was so much older then, I’m younger than that now,” Bob Dylan sang in 1964’s “My Back Pages.”Reverse-aging or no, the legendary Jewish folk singer turns 75 on Tuesday.While Dylan’s Jewishness has been examined and reexamined over the years, relatively little attention has been paid to his 1983 song “Neighborhood Bully” — a rare declaration of full-throated Israel support by a mainstream American rocker.The lyrics (posted in full here) equate Israel with an “exiled man,” who is unjustly labeled a bully for fending off constant attacks by his neighbors.Dylan released the song on his second studio album, “Infidels,” in the wake of his brief born-again Christian phase during the late 1970s and early 1980s.Some of the lyrics sound like they could have been taken from speech by Israeli Prime Minister Benjamin Netanyahu, who often portrays Israel as besieged.    Well, the neighborhood bully, he’s just one man    His enemies say he’s on their land    They got him outnumbered about a million to one    He got no place to escape to, no place to run    He’s the neighborhood bullyOthers are reminiscent of the 2015 campaign ads for religious Zionist political party Yisrael Beytenu, in which Education Minister Naftali Bennett urges Israelis to “stop apologizing.”    Well, he knocked out a lynch mob, he was criticized    Old women condemned him, said he should apologize.    Then he destroyed a bomb factory, nobody was glad    The bombs were meant for him. He was supposed to feel bad    He’s the neighborhood bully“Neighborhood Bully” came after Israel’s controversial 1982 Lebanon War, at a time when even Israelis were questioning their government.Born Robert Allen Zimmerman and raised Jewish in Wisconsin, Dylan has maintained Israel ties throughout his life. He visited the country several times in the late 1960s and 1970s and even took steps toward joining a kibbutz. He played three shows in Israel in 1987, 1993 and 2011. The Boycott, Divestment and Sanctions movement pressed him to cancel his most recent performance — to no avail.Even more recently, Israelis can thank Dylan for the 2014 Rolling Stones concert in Tel Aviv, the band’s first visit to the country. According to Stones guitarist Ronnie Wood, Dylan gave them the idea.“He was coming off stage and said, ‘We’re going to Tel Aviv,’” Wood told Israel’s Channel 2 at the time. “He had a big smile on his face and said he loved it there.”