“It is possibly the ugliest beauty contest ever held,” says Board of Deputies of British Jews. 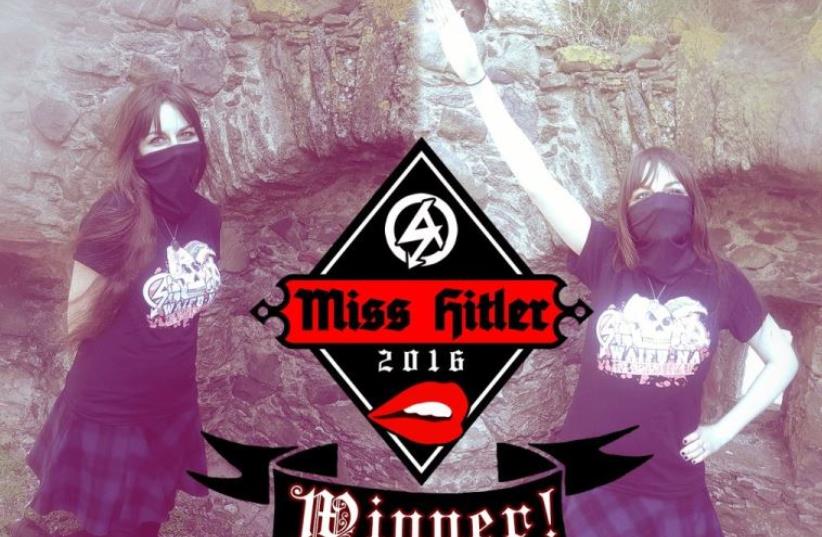 British neo-Nazi 'Miss Hitler' pageant
(photo credit: TWITTER)
Advertisement
A Scottish woman who said she turned to neo-Nazism after “the Jewish propaganda became too obvious to ignore” was named Miss Hitler 2016.National Action, a British white supremacist group, announced the winners of its contest on Twitter and on its blog earlier this week because Facebook removed the group’s page in May, shortly after the contest was announced.Female supporters were invited to “submit a short interview for the site under a pseudonym, accompanied by photos in the T-shirts we sent them.”According to the group, the contest was designed to raise awareness of its female supporters, who “rarely get much spotlight or recognition.”The winner, a brunette who was not identified and appears in photos with the lower half of her face covered and performing the Nazi 'Heil Hitler' salute, said in a Q&A on the site that she “didn’t want to believe that the Jews are the enemy, as I was brought up to believe that they are very similar to Christians.”However, she continued, “Eventually the Jewish propaganda became too obvious to ignore and so I became involved with NA.”Asked which one person she would kill if she could “get away with it,” Miss Hitler named German Chancellor Angela Merkel, saying she would put her “in one of her camps and let her pet refugees do the rest.”In touting the contest, National Action said, “We hope this will grant a unique insight into our movement that will challenge the widely held preconceptions society has about the far-right.”According to Britain’s The Daily Record, the Board of Deputies of British Jews denounced the contest as a “clear case of inciting racial hatred,” adding, “It is possibly the ugliest beauty contest ever held.”According to the Daily Mirror, National Action drew fire last month when photos emerged of its members performing Hitler salutes in the “execution room” of the Buchenwald concentration camp in Germany.The group has also held numerous protests throughout the United Kingdom, including one in which members defaced a London statue of Nelson Mandela, the late South African president and anti-apartheid activist.