Merkel, elected to her position in 2005, has been called the most powerful politician on the planet and is the first woman to lead Germany. 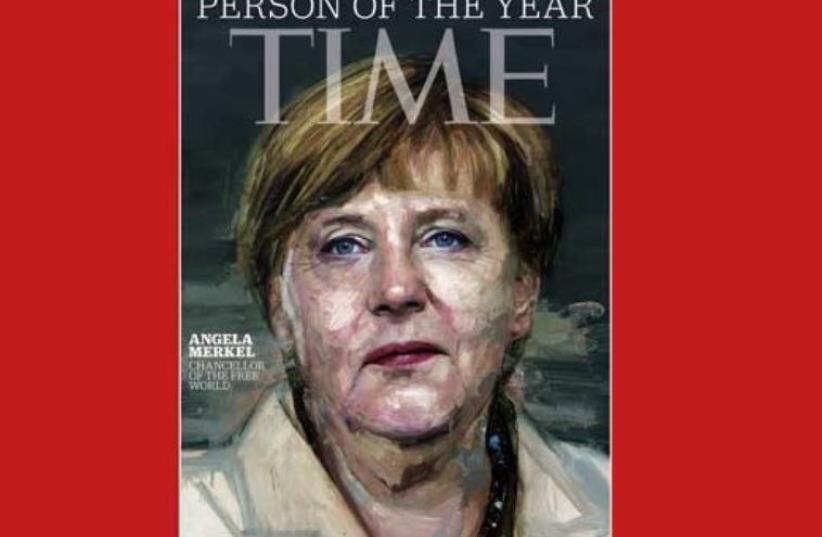 Angela Merkel, TIME magazine's person of the year for 2015
(photo credit: screenshot)
Advertisement
Time magazine named German Chancellor Angela Merkel its 2015 "Person of the Year" on Wednesday (December 9), noting her resilience and leadership when faced with the Syrian refugee crisis and turmoil in the European Union over its currency this year.In a statement explaining the magazine's choice, managing editor Nancy Gibbs said despite crises in the region that caused "reason to wonder whether Europe could continue to exist," Merkel, 61, emerged as an "indispensable player.""For asking more of her country than most politicians would dare, for standing firm against tyranny as well as expedience and for providing steadfast moral leadership in a world where it is in short supply, Angela Merkel is TIME's Person of the Year," Gibbs wrote.In response to the news, the German government spokesman Steffen Seibert said he was sure the chancellor would cherish it as an incentive in her job.Merkel, elected to her position in 2005, has been called the most powerful politician on the planet and is the first woman to lead Germany.Time noted her leadership this year in leading the West's response to Vladimir Putin's "creeping theft of Ukraine" and welcoming refugees to Germany despite "the reflex to slam doors, build walls and trust no one."Merkel topped a short list of finalists that included US Republican presidential candidate Donald Trump, who came in third, and Islamic State leader Abu Bakr al-Baghdadi, who was runner-up.She is the first individual woman to hold the title in 29 years, though women have been honored as part of a group. Last year, a group of Ebola doctors and survivors won the title.