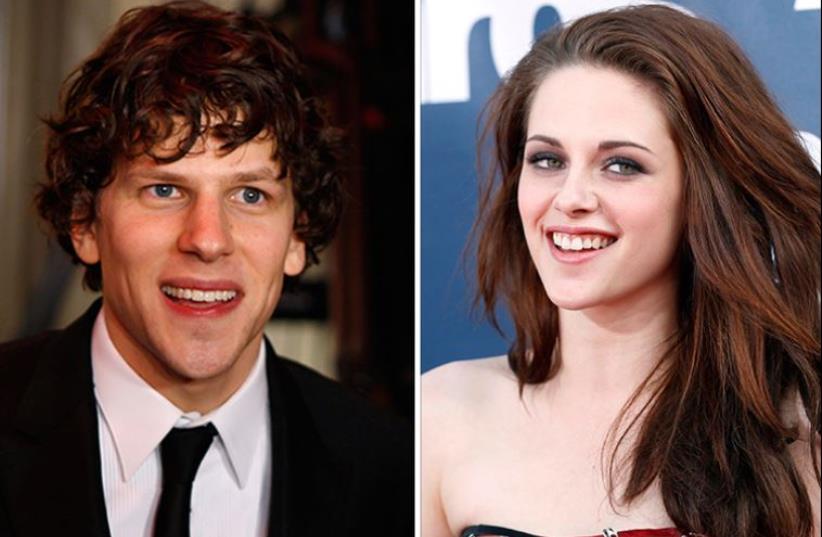 Kristen Stewart and Jesse Eisenberg
(photo credit: REUTERS)
Advertisement
Co-stars Kristen Stewart and Jesse Eisenberg tackled sexism with deadpan humor this week, as they took it upon themselves to interview each other in a video for comedy website "Funny or Die."The actors, who were promoting their upcoming action-comedy film American Ultra, read from "accidentally switched" question cards, poking fun at stereotypically shallow and intrusive questions reporters ask female stars, while reserving simpler, less invasive questions for their male counterparts.
Kristen Stewart and Jesse Eisenberg's Awkward Interview from Funny Or Die
During the interview, Stewart shoots questions at Eisenberg regarding his favorite designers, his love life, his body, pregnancy and even throws in a request for  a mani-cam display of his hands - which has become a symbol of gender inequality in Hollywood. The American-Jewish actor, who is most famous for his role as Mark Zuckerberg in The Social Network, acts uncomfortable, noting that the questions don't seem "appropriate" and are in no way relevant to their film. Twilight star Stewart retorts that she is accustomed to answering these types of queries.