Tyler’s celebrity advertising partner Bar Refaeli watched part of the show from the wings and throughout the show, he peppered his between-song patter with Hebrew. 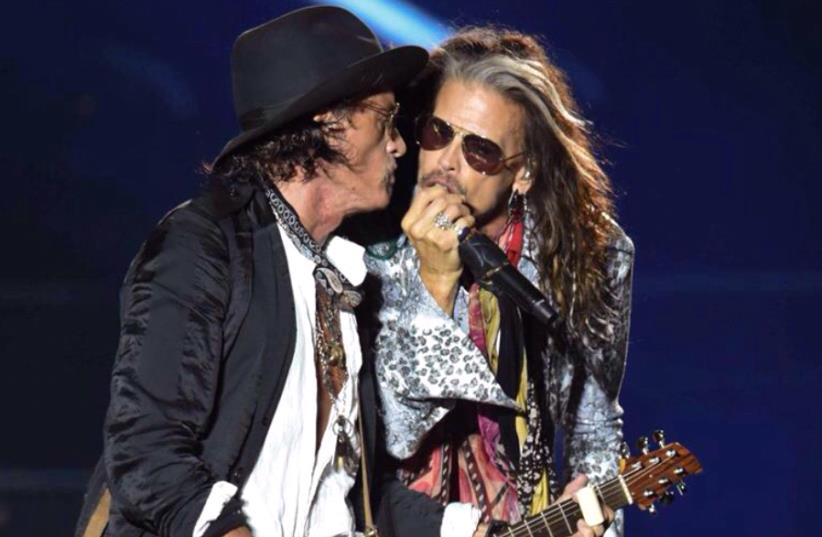 Aerosmith live in Tel Aviv, May 2017
(photo credit: Courtesy)
Advertisement
It was fitting that venerable American rockers Aerosmith opened up their debut show of the Aero Vederci tour Wednesday night at Tel Aviv’s Park Hayarkon with the scorching “Let the Music Do the Talking,” a relatively obscure track from their 1985 album Done with Mirrors.Performing in Israel for the first time since 1994, Steven Tyler, Joe Perry and company definitely put the focus squarely on the songs from their 44-year recording career. No fireworks, background dancers or outfit changes – just meat-and-potatoes rock from the original quintet of one-time Boston brats, aided by keyboard player and high harmony singer Buck Johnson.Focusing on material from their post-mid 1980s comeback, the band mixed the raunchiness of “Dude (Looks Like a Lady)” and “Rag Doll” with the requisite power ballads that gave the band their second life, like sound-alike mainstream smashes “Cryin’” and “Crazy” that prompted mass singalongs from the near capacity crowd in the park.But where things really got interesting, and demonstrated the band’s worth, was when they hearkened back to their days as a blues-and-boogie groove band. Tyler might have confused the crowd when he introduced a Fleetwood Mac song by saying it was what inspired the band to start making music. But he wasn’t talking about the sunny California pop of the Stevie Nicks era, but the seminal heavy metal blues of Peter Green-era “Oh Well” – which Perry and his co-guitarist Brad Whitford shred to pieces.The latter-day bluesman mode suited the band as well on “Stop Messin’ Around,” “Hangman Jury” and “Baby, Please Don’t Go,” with Tyler given the opportunity to shine on sinewy harmonica solos.Opening nights of tours are fraught with glitches, technical difficulties and rustiness, and this was no exception. A couple of times it appeared the band wasn’t totally in sync, some songs ended with hesitation, Tom Hamilton’s bass malfunctioned in the second song and other equipment problem threatened to derail the proceedings.The 69-year-old Tyler, who pranced around the stage like a teenager, with a retro mic, was clearly having ear monitor problems and spent as much time talking to offstage crew as he did addressing the audience. However, to the band’s credit and proving their professionalism, they overcame the first-night follies to soldier through with a humor and punky attitude intact. The occasional raggedness, impromptu lyric changes from Tyler, and spontaneity, along with the band’s clear enjoyment at playing together was a refreshing change from the choreographed and scripted stadium shows concert fans have gotten used to and seem to demand.Tyler’s celebrity advertising partner Bar Refaeli watched part of the show from the wings and throughout the show, he peppered his between-song patter with Hebrew, even joking that after spending five days in the country touring before the show, he was “making aliya.”After ending with war horses “Dream On” and “Walk This Way,” the band gathered at the tip of the stage’s runway and Perry said that 23 years was “too long” between visits to Israel.Although this may or may not be their farewell tour, Aerosmith still seem to have a bright future if they want it. Just like the great bluesmen of the past, they could be sitting on stools into their 80s, picking the blues and blowing the harp at a small club in Tel Aviv. Just like the way they started in Boston.