A Georgian restaurant in Jerusalem serves up exotic food. 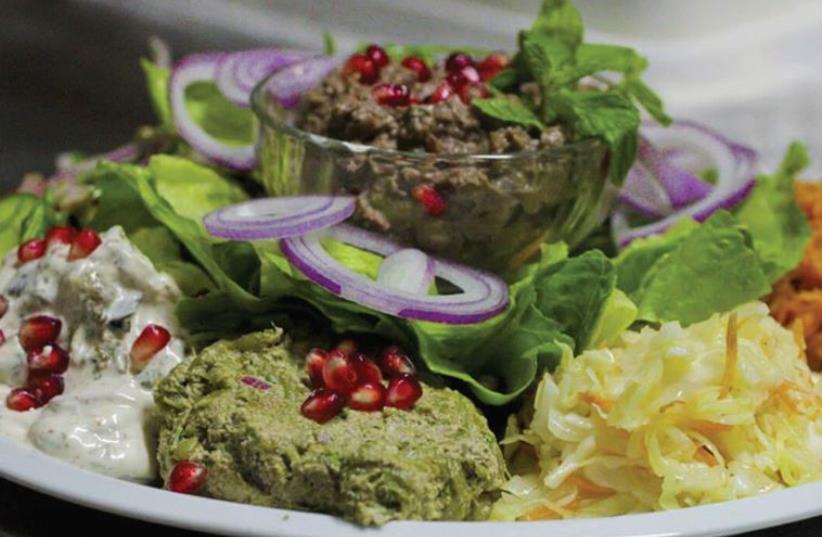 Kangaroo restaurant
(photo credit: PR)
Advertisement
The Nahalat Shiva neighborhood of Jerusalem is home to a diverse array of restaurants and bars – but only one that specializes in the distinctive cuisine of Georgia, the republic in the southern region of the former Soviet Union, whose food is more commonly known in Israel as ochel gruzini.“Kangaroo” is a whimsical name for a restaurant concedes owner Eka Tsiskarishvili, but perhaps no less unusual than the restaurant’s colorful history under her parents: a theater director father and pianist mother from the FSU who were the founders of a cafe-cumcultural center for fellow Russianspeaking immigrants with artistic backgrounds.As the food served in the cafe grew ever more popular, the restaurant took on a life of its own, moving to several locations as it outgrew ever-larger premises before becoming a fixture in one of the most fashionable restaurant districts in Jerusalem. The eatery’s current location takes maximum advantage of its historic building, comprising an upstairs dining area, a shady patio for al fresco dining and a cozy indoor alcove suitable for a romantic repast.“Eating and drinking are at the heart of Georgian culture,” says Tsiskarishvili. “If you are invited to a Georgian home, you will invariably find a table groaning under the weight of a huge meal.”Kangaroo pays its respects to this tradition by serving overly generous helpings. The assortment of salads called Salad Lina (NIS 75) is a prime example: They are meant to be shared among three to four diners. If two people order it to share, they are advised to leave enough to take home, with the caveat that the leftovers be refrigerated and eaten within 24 hours.My sampler included a green salad; two variations of eggplant salad; a cabbage salad; and two kinds of lobio, a bean paté. They were served with hot mini-loaves of Georgian bread, accompanied with a seasoned salt imported from the Caucasian highlands. The rolls dipped in the pinkish-white salt were tasty enough to compete with the inviting spread of salads.Well, almost. It was hard to pick a favorite among the salads, although my vote would have to go for the ones made with a staple Georgian ingredient – ground walnuts – used much in the way other cuisines might employ herbs and spices.The eggplant with walnuts may have looked like a vegetarian chopped liver (with the same consistency), but the taste was superior to anything you can find in a local store.The cabbage salad was sizable pieces of pickled cabbage, another staple of Georgian meals, Tsiskarishvili explains, because it is considered to aid in digestion.The green salad also comes with its vegetables – chunks of tomatoes, lettuce, cucumber and onion. Dressed simply with coldpressed sunflower oil and touches of vinegar, cilantro and salt, it was quite refreshing.Still, the stars of the salad course were the red and green lobio dishes. Here is where Tsiskarishvili admits to deviating from the norm. While both are meant to be served cold, Kangaroo serves the red lobio warm in its own small ceramic crock. If that was deviating from tradition, I was certainly willing to sacrifice a little authenticity: the bean paste garnished with coriander leaves and dried sumac berries was delicious, deserving of being eaten on its own rather than as a dip for even the best of bread.To drink, Tsiskarishvili suggested Borjomi, a Georgian mineral water (NIS 14). It has an earthy taste – like European mineral water on steroids – but it does the trick. I followed her advice again and chose a glass of one of two light-bodied Old Tbilisi Georgian red wines (NIS 35) to accompany the main courses; it turned out to be ideal for the warm weather.Another good summer choice as a main course is satsivi – chicken breast cooked in a creamy walnut sauce, served cold (NIS 49).Though this chicken is neither breaded nor fried, the KFC slogan is still very apt: finger-licking good.According to Tsiskarishvili, soups are generally not served in Georgia, but they are on the menu at Kangaroo in deference to Israeli preferences. I sampled the kharcho (NIS 29/35), a creamy mutton and rice broth that the restaurant describes as “spicy” – a characterization with which I would agree, but in the sense of pleasantly suffused with a multitude of spices rather than piquant.The veal shashlik (NIS 79) served on skewers is not as exotic as most other items on the menu, but there is no arguing with the quality of the meat or the perfection to which it was grilled.On the other hand, it is hard to imagine a dish more on the opposite end of the familiarity spectrum than chakapuli (NIS 79), a pungent mutton stew. This is real mutton, bearing little resemblance to lamb. It is recommended, therefore, for diners who are already aficionados of the meat from mature sheep.A popular dish in Georgia is khinkali (NIS 65), dumplings that look much like their boiled Chinese counterpart but with a fig-like “stem” of dough on top.Stuffed to bursting with a succulent combination of beef and pork, this is one dish where Kangaroo refuses to tamper with the original recipe (in other words, don’t bother asking if there is a beef-only version). The purist will be rewarded by the restaurant’s obstinacy: this delicacy is truly the piece de resistance.There is really only one dessert that is distinctive enough to merit consideration: churchkhela (NIS 34), strung walnuts (whole, not ground) dipped in syrupy grape juice and dried sausage-style. It looks like a chocolate Toblerone bar that melted slightly and then was refrigerated. The texture is like a rich, crunchy, fruit “leather,” but the taste – like most of the dishes on Kangaroo’s extraordinary menu – is one that has to be experienced to even begin to describe.

The writer was a guest of the restaurant.Kangaroo
Not kosher
7 Ma’alot Nahalat Shiva St.
(02) 625-0618
Advertisement
Subscribe for our daily newsletter