As the crowd stood to listen to The Star Spangled Banner, just moments before the starting pistol was fired, Deutsch just couldn’t wait to take on this new challenge. 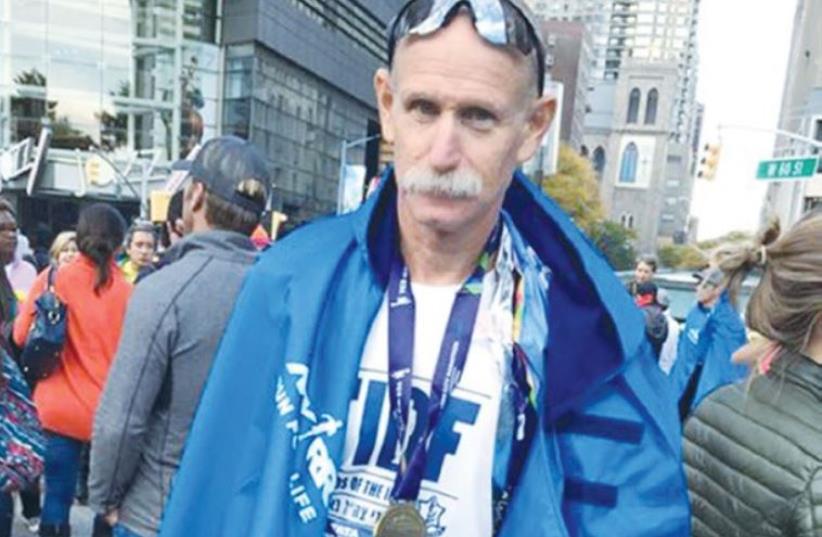 DISABLED IDF veteran Adi Deutsch shows off his medal at Manhattan’s Columbus Circle after running in the New York City Marathon on Sunday
(photo credit: Courtesy)
Advertisement
NEW YORK – Standing among thousands of people on the Verrazano bridge in the 12 degrees celsius weather on Sunday, 54-year-old Adi Deutsch felt fluttering butterflies in his stomach.He had arrived from Israel just two days earlier thirsty for this feeling : It was the very first time that he was going to run the New York City Marathon.As the crowd stood to listen to The Star Spangled Banner, just moments before the starting pistol was fired, Deutsch just couldn’t wait to take on this new challenge.“When you are standing there with 50,000 people, it’s a very emotional and moving moment,” he told The Jerusalem Post a few hours after the race.Running this marathon was an opportunity Deutsch couldn’t have taken for granted. Just four years ago, Deutsch didn’t think he would ever run again.In 1979, Deutsch was on military duty when he took a life-altering step.A land mine exploded beneath his foot, cutting off his leg just below the knee.The incident was that much more devastating to him, since sports and physical activity had always been part of his life. But there was no way Deutsch was giving up on his passions.With a simple everyday prosthetic, Deutsch was able to participate in some team sports.He had always been curious about doing triathlons and while the prosthetic enabled him to cycle and swim, running didn’t seem like a realistic option. Everything changed, however, in January 2012.“I got a call from the Friends of the IDF organization,” Deutsch recalled. “They told me about their program and they suggested that I join.”The program in question was the FIDF’s Strides Program, which was especially established to provide advanced prosthetics to wounded IDF veterans in order to enable them to participate in sports.“I of course didn’t hesitate for a second and told them I want to do it,” he said. “And that’s how I found myself in January 2012 on overnight flight 007 to New York.”Between 10 days and two weeks later, Deutsch returned to Israel with three new prosthetics especially made for running.“After 34 years not running, I got the ability and the right to run again and it was an amazing feeling,” he told the Post. “As someone who loves sports and challenges it brought me back to life.”Just a few months later, in April 2012, Deutsch won third place in the para triathlon category of the European Triathlon Championships held in Eilat. In January 2013, he went to back to southern Israel to push more limits and participate in one of the most strenuous physical competitions in the world, the Iron man Triathlon.Since then, the IDF veteran has become a well-known figure in the sport community in Israel and has received a lot of media attention, which makes him feel a responsibility for other disabled athletes.Deutsch completed the New York City Marathon in three hours and 54 minutes on Sunday, proudly wearing a white tank top with the FIDF on it.“It’s a massive amount of people who have the same passion, and this is one of the most important marathons in the world,” he told the Post. “It’s emotional for any athlete. You want to experience it, you want to make the most of the moment, of how powerful it is.”FIDF National Director and CEO Maj. Gen. (Res.) Meir Klifi-Amir said the organization is “incredibly proud” of Deutsch for his achievement.