Dressing up Emek Refaim for winter

The main shopping street in the German Colony has been dressed up for the winter, from Zer4U to Aroma. 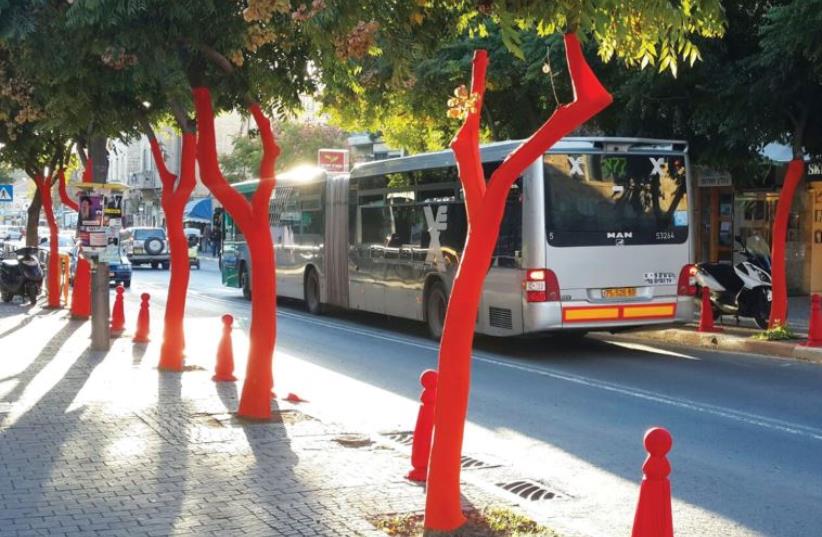 Wrapping trees in color on Emek Refaim Street
(photo credit: TAMAR KLEIN)
Advertisement
If you walked down Emek Refaim Street this week and felt like you were part of a chess game or a Dr. Seuss children’s book, there is a good reason for that. The main shopping street in the German Colony has been dressed up for the winter, from Zer4U to Aroma.The outdoor art installation is the brainchild of Talya Tomer-Schlesinger of the Talya Adi Studio.Tasked with the job of bringing life and color to the streets, she chose to use the objects and items already on the street as her canvas. By covering the bollards (short posts) and trees along the route, she created a special outdoor exhibit.Tomer-Schlesinger explains that her “idea was to show people that the art always existed but after the bollards and trees were covered it became more obvious.”Sewing marks and seams are meant to be visible and each piece is sewn and prepared individually. It is not just about the artistic expression but also about the craft.Tomer-Schlesinger was inspired by Christo and Jeanne-Claude who were well known for creating environmental works of art including the wrapping of the Reichstag in Berlin and the Pont-Neuf bridge in Paris, the 39-km. long Running Fence in Sonoma County , California, and The Gates in New York City’s Central Park.She began her artistic expression this past summer by covering municipality benches with fabric “bringing the feeling of an indoor upholstered couch out into the public space.” The benches can be found on Bethlehem Road and were sponsored by the community center in Baka.The materials chosen for her installations are picked in order to weather the rain and cold and she hopes they will stay up for two to three months.“Dressing Emek Refaim for the Winter” was part of the Emek Refaim Lights and Color Festival that took place on December 2 and 3, and was initiated by City Councilwoman Einav Bar (Hitorerut) with funding from the for Business Advancement Department at the Jerusalem Municipality in cooperation with Ginot Ha’ir Community Council.The ultimate goal is to bring more shoppers to the street and to support the local businesses. Similar to the idea of the colorful umbrellas, that brought many visitors to the Nahalat Shiva neighborhood this summer, Tomer-Schlesinger hopes that Emek Refaim will become a popular Jerusalem selfie spot.Along with this new outdoor street art initiative, the Ginot Ha’ir Community Council is also running “Mondays in the Moshava” and special Hanukka activities along Emek Refaim. All of the planning is done in conjunction with the business owners on the street. Details can be found on the community council website www.GinotHair.org.il.Tomer-Schlesinger is excited to be a part of this new program and thinks that it is “very fun when art makes people happy and makes a difference.”This is why she brought her artistic talents outdoors.As I stood on Emek Refaim talking to her, two drivers passed by hooting their horns and yelling “kol hakavod [good job]” to show their support for her project. A teenager stopped to ask how she could get involved and a soldier stopped by to bashfully ask if she could sew a button on his uniform.By dressing up Emek Refaim for the winter, Tomer-Schlesinger and the Ginot Ha’ir Community Council have accomplished their goals of bringing color and fun to the neighborhood and involving bystanders in art and culture.The writer is the founder of Fun In Jerusalem (www.funinjerusalem.com); she lives in Jerusalem with her husband and three kids and loves to inspire family fun. [email protected]