The summer temperatures in the picturesque country are a welcome treat for visitors from the Middle East. 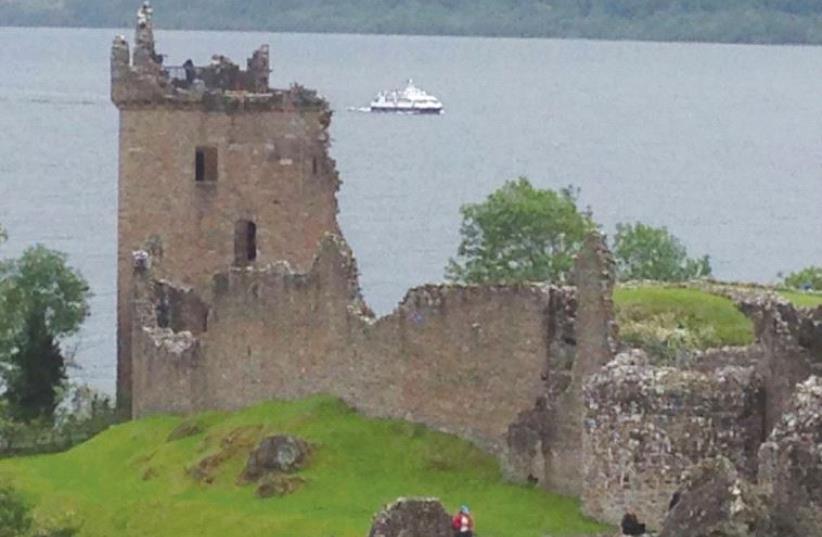 URQHART CASTLE on Loch Ness
(photo credit: SUSIE WEISS)
Advertisement
Coming from Israel, the first thing one notices about Scotland – even before the castles, the sheep or the Highlands – is the air itself. At the risk of using an old cliché, this locale, on several levels is, well, a breath of fresh air. The cool temperature, even in July and August, is a welcome treat when you arrive from the Middle East, where “summer” can be six months long.And though rain almost always seems to be in the forecast – indeed, the wettest parts of Scotland experience an average of 250 days of rain per year – Edinburgh, the capital, is actually rain-free 70 percent of the year. So, simply stick an umbrella in your backpack, smile at the ubiquitous clouds and go about your merry way.We began our journey to Scotland by taking the Caledonian night train from London’s Euston Station (Caledonia, for trivia buffs, is the country’s original name). Now, if you like train travel, which we do, the Caledonian sleeper is a neat experience.The compartments are small, the halls are narrow, but the overall feeling of gliding through the countryside on the rails has a special feel to it. It’s particularly relaxing if you are the family’s designated driver back home; for once, you can sit back, take in the scenery and let someone else watch the traffic.We alighted in Inverness, one of the country’s most beautiful spots, situated along the banks of the famous Loch Ness (“Loch” is Scottish for “lake,” if you didn’t already know). There are beautiful nature walks along the water, and the Highlands, with their greenest of greens, are unparalleled in their pristine beauty. We visited Loch Ness’s castle and museum, keeping a wary eye out for the legendary monster of the deep (alas, it made nary an appearance above the water that day). We bused to Ft. George and hiked to Drumnadrochit, both of which skirt the lake; often, as seasoned travelers well know, the best sights are somewhere off the beaten path.And then it was time to hit the big city.While Glasgow is a bit larger, the real action in Scotland is in Edinburgh, a bustling metropolis of half a million people, with a fascinating history and a unique mix of the ancient and the modern. By far the most imposing feature of the city is the castle fortress that dominates the skyline from its position high atop Castle Rock.The castle houses the “Crown Jewels” of Scotland – the royal scepter, sword and the Stone of Scone, upon which Scottish kings sat at their coronation and which is the primary symbol of Scotland’s many wars and struggle for independence. It claims to be “the most besieged place in Great Britain and one of the most attacked in all the world.”The Old City is filled with marvelous places to visit, many of them along the Royal Mile in the center of town. We spent several hours at the Surgeon’s Hall Museum, located in the Royal College of Surgeons.There one can trace the progress of modern medicine and dentistry and view a fabulous collection of medical instruments throughout the ages. (The museum, we noted with interest, is endowed by the late Maurice and Vivien Wohl, among Israel and England’s greatest philanthropists).The National Galleries, the Royal Botanic Garden, the Scotch Whiskey Experience and Camera Obscura’s World of Illusions are also “must” stops in town.What we found particularly fascinating was Mary King’s Close, a descent deep beneath the streets to the “city under the city,” for a glimpse of what Edinburgh looked like between the 16th and 19th centuries.It was not a pretty sight: Cramped, crowded and continually beset by outbreaks of disease – the Black (Bubonic) Plague chief among them – life in this densely populated quarter was a study in human suffering and the struggle merely to survive.No trip to Scotland is complete without an excursion to the nearby Bonnie Banks o’ Loch Lomond, the largest freshwater lake in Great Britain. More than thirty islands dot the lake, which boasts numerous mansions along its shores – we actually watched a seaplane land at one estate while on our boat – as well as the Loch Lomond Golf Club, which has hosted the Scottish Open (the sport of golf, you may remember, was invented in Scotland).Our stay in Edinburgh was made even more pleasant by our choice of lodgings, the GlenAlmond House at Mayfield Gardens (www.glenalmondhouse.com). Just a short bus ride from city center, this spectacular home features nine rooms, all uniquely furnished with luxurious, antique-style period furniture from the Victorian and Regency eras. Run by Fiona Mackie, an Edinburgh native, and Jimmy Mahmud, a former restaurateur and tour guide from Sumatra, Indonesia, the proprietors do anything and everything to make their guests comfortable. This includes advice on what to see while visiting, arranging guided tours, and offering a sumptuous breakfast each morning, with special attention paid to vegetarian, vegan and gluten-free diets.Prices range from 100 to 120 pounds per night. There is no better feeling, after a long day of touring, than climbing beneath the cozy covers of a four-poster bed.All in all, there is much to see and do in this captivating country. Whether you take the high road or the low road, there are few places more scenic and satisfying to visit than Scotland.