Function allows users in the French capital to mark themselves as safe, and notify their friends on social media platform of their status. 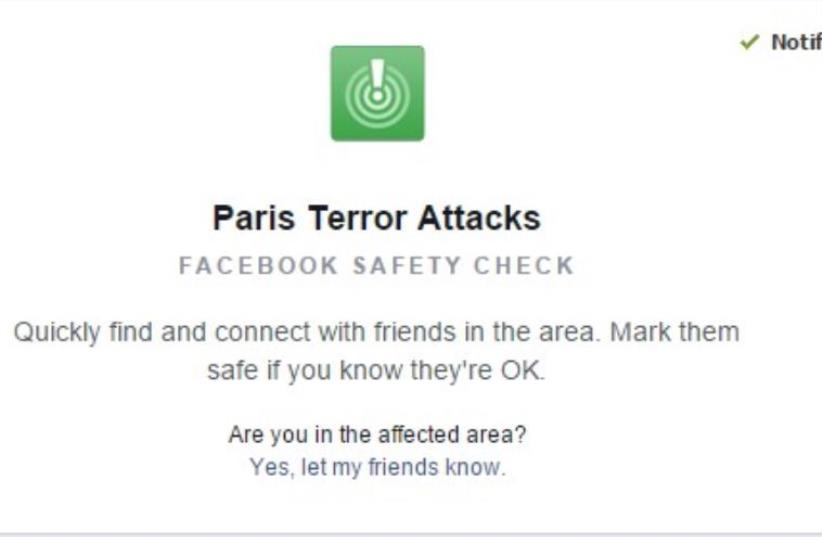 Facebook saftey check for Paris
(photo credit: screenshot)
Advertisement
Facebook activated a safety notification check-in feature for the "Paris terror attacks" after dozens were killed in multiple attacks around the French capital late Friday. The Facebook "Safety Check" tool allows users in the affected French capital to mark themselves as safe, and notify their friends on the social media platform of their status.The safety function also allows Facebook friends to tag others who they know are safe in the area. Facebook reported on Sunday morning that in the last 24 hours 4.1 million people had marked themselves as safe using the tool and 360, million were notified that their friends were safe. In addition, Facebook said that 78 million people have had 183 million Facebook interactions related to the attacks.Facebook CEO Mark Zuckerberg posted an announcement of the "Safety Check" activation, along with a message in solidarity with Paris and condemning violence.

My thoughts are with everyone in Paris tonight. Violence like this has no place in any city or country in the world....
Posted by Mark Zuckerberg on Friday, November 13, 2015

The Facebook application was launched earlier in the year after a dead earthquake struck Nepal in April.About 100 people were killed in the Bataclan concert hall in central Paris and 40 others have died in other locations in and around Paris in militant attacks late Friday and early Saturday, an official at Paris City hall said.Gunmen and bombers attacked busy restaurants, bars and a concert hall at locations around Paris on Friday evening, killing dozens of people in what a shaken President Francois Hollande described as an unprecedented terrorist attack.Reuters contributed to this report.