The actress and comedian's joke spread in GQ was not so funny to fans of the Star Wars franchise. 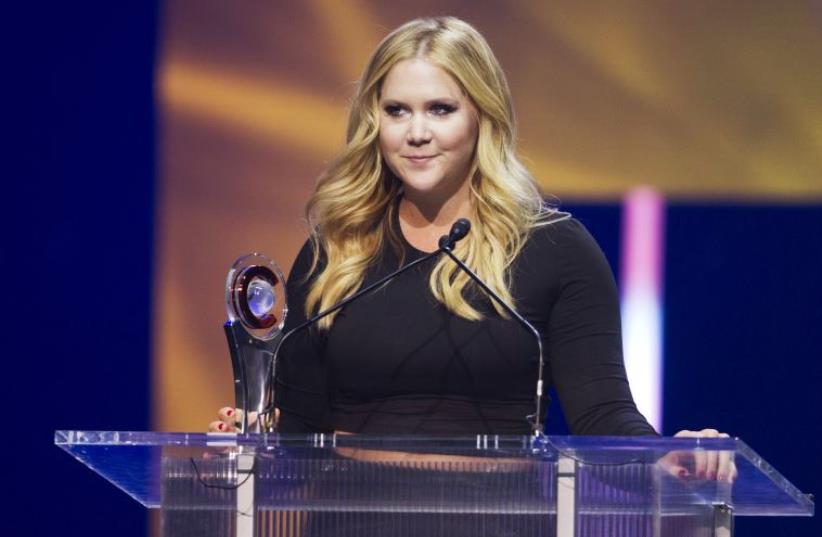 Amy Schumer
(photo credit: REUTERS)
Advertisement
GQ Magazine declared Amy Schumer the “funniest woman in the galaxy” in their latest spread,  but not everyone is laughing.The 34-year-old Jewish comedian and star of the newly released romantic comedy Trainwreck is being criticized for her risqué Star Wars-themed photo shoot, in which she posed in a sexually suggestive manner with characters of the Star Wars franchise.The controversial photos used in the spread include the actress lying in bed with R2-D2 and C-3PO and putting a light saber in her mouth.

.@amyschumer is the cover star of GQ's new comedy issue and the funniest woman in the galaxy! http://t.co/OAoWx7Fkgo pic.twitter.com/OYpq5oW8et
— GQ Magazine (@GQMagazine) July 15, 2015

The August cover, which GQ posted on their Instagram account, features Schumer wearing a Princess Leia bikini top while sucking on C-3PO’s finger.Fans took to Twitter to voice their frustrations with the spread, calling it "in poor taste." The official Star Wars Twitter account tweeted a response on Friday in which they stated that they do not condone the use of their characters in an inappropriate manner.

@RogueKnite Lucasfilm & Disney did not approve, participate in or condone the inappropriate use of our characters in this manner.
— Star Wars (@starwars) July 16, 2015

Star Wars content is jointly owned by the Lucasfilm production company and Disney, who acquired the franchise in 2012.While the photo spread upset some fans, one actor from the franchise didn’t seem to mind. Mark Hamill, the actor who played Luke Skywalker seemed fond of the spread in his response to angry fans. Hamill tweeted that he “got excited” when he saw the pictures and said they would be “lucky” if Schumer was cast in a future movie.

Got excited when I saw @amyschumer @GQMagazine pics & thought she was just cast in Ep 8! We should be so lucky.
— Mark Hamill (@HamillHimself) July 18, 2015