Guest musicians come all the way from distant Estonia for festival at Kiryat Ye’arim Church on October 4. 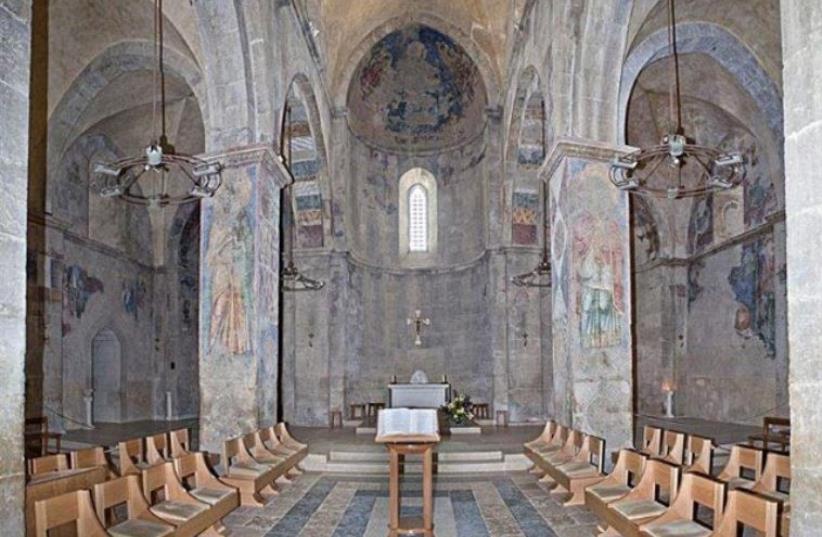 Kiryat Ye'arim Church in Abu-Gosh
(photo credit: TOURISM MINISTRY)
Advertisement
The guest musicians who came all the way from distant Estonia to the Abu Ghosh Festival were the Hortus Musicus Ensemble, led by conductor-violinist Andres Mustonen.Mustonen is a veritable bombshell of energy, conducting not with a baton but with his violin bow, making himself and his violin the primus inter pares of the ensemble. Without changing, adding or deleting even a single note of the mainly Renaissance-Baroque works, from Josquin des Pres via Monteverdi and Frescobaldi to Vivaldi, he made this mostly 600-year-old music sound contemporary and communicative by his explosive energies, refreshing tempi and invigorating accentuations. He pulls his ensemble with him, infecting it with his contagious enthusiasm.His rendition of Corelli’s La Folia, embellished by some additional variations contributed by ensemble member Tonis Kaumann, was a masterpiece of brilliant virtuosity.The ensemble members play period instruments, contributing attractive tone colors. They also sing in perfect coordination, with discreet emotional expression, and also with a sense of humor where suitable.The great surprise was a local product – the relatively unknown young Israeli soprano Daniela Skorka. Her uncommonly beautiful voice is a gift of nature, but her captivating way of using it endows it with youthful freshness and glamour.In arias by Frescobaldi and some others it remained caressingly soft and unstrained even on the highest notes. She also knows how to hold these long enough to let their impression sink in, without hurrying urgently down to the safer lower regions. Her coloraturas were effortlessly polished and smoothly lubricated. In an aria by Vivaldi she also displayed a formidable talent for dramatic expression. One would like to hear her in a solo recital and in a major operatic role.