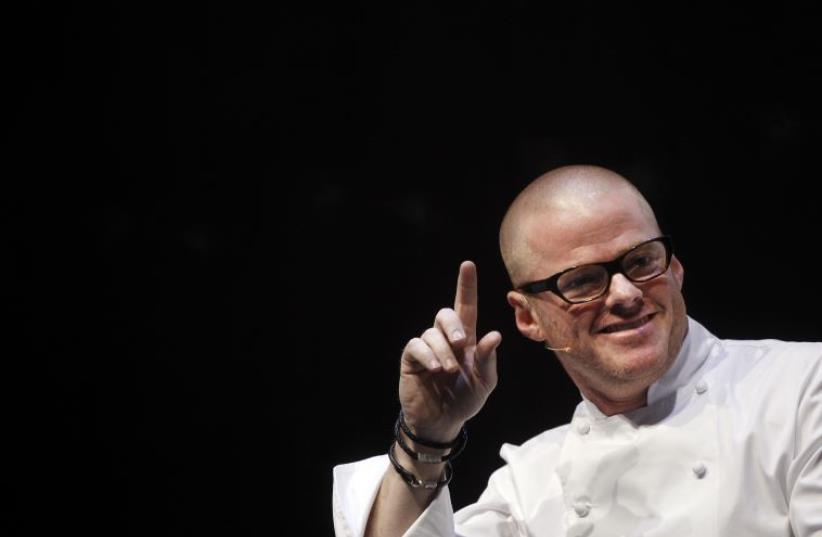 Chef Heston Blumenthal
(photo credit: REUTERS)
Advertisement
In a culinary first, a Jewish-British celebrity chef created English dishes, including a bacon sandwich, for consumption in space.Heston Blumenthal spent two years preparing the dishes for the English astronaut Tim Peake, who ate the bacon one on his very first day in space in December, Channel 4 revealed in “Dinner in Space” — a special program about Heston’s endeavor which aired last week.The program was about the two-year effort by Blumenthal – a chef with three Michelin stars — to prepare, in partnership with the European Space Agency, gourmet meals compliant with the strict safety requirements for space food.In space, astronauts eat freeze-dried, vacuum-packed meals concocted by scientists — and commercial brands of biscuits and chocolates for desert. They cannot cook in space. However, in recent years, gourmet chefs, including Alain Ducasse of France, have prepared more appetizing meals to be taken on space missions.Yet as far as is known, Peake, who took Heston’s dishes with him when he was launched in December for a six-month stay at the International Space Station, will be the first astronaut to have eaten in space such English dishes as sausage sizzle, red curry and apple crumble. Peak, who in January became the first British astronaut to perform a space walk, also took some Key lime pie with him.Heston had to package the dishes in tins, partly for safety reasons to avoid contamination but also for “texture and the taste, there was just no other way to do a bacon sandwich,” Heston said in a recent interview to Radio Times.He added: “We need to think of food for astronauts as more than fuel, we have to understand it’s a mood-changer.”Heston tested his own dishes in zero gravity conditions to fine tune their consistency and flavor ahead of their launch into orbit. “Without gravity the way the fluids in your body behave changes and it can put pressure on your sinuses,” he said in the radio interview. “This, in turn, affects your sense of smell and taste. That’s why astronauts like spicy foods and I made sure there was a curry in Tim’s selection.”