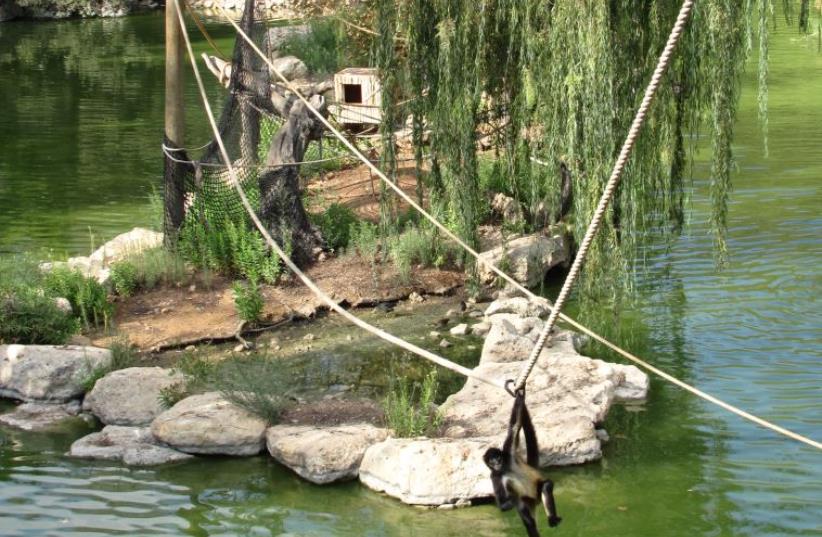 A black-handed spider monkey swings on a rope over the artificial lake at the Jerusalem Biblical Zoo
(photo credit: YONINAH/WIKIMEDIA COMMONS)
Advertisement
■ JERUSALEM ZOO director Shai Doron tends to talk about the animals at the zoo as if they were humans. He has a soft spot for each and every one of them. Every Friday, in a conversation he has with Israel Radio’s Yaron Enosh on Reshet Bet, he singles out a particular zoo creature and talks about it at length. Last Friday it was Tamar, the hippopotamus, who at age 60 plus, is believed to be the oldest hippopotamus in the world. The lifespan of a hippopotamus is usually about 40 to 50 years, but according to Doron, Tamar shows no signs of aging and is quite content to splash around in the water. Hippos can be quite vicious when they attack, which is surprising, considering that they are vegetarians.Tamar was one of the attractions at the old Biblical Zoo in Romema before it moved to its present location in Malha in the early 1990s.Many Jerusalemites may remember the zoo in Romema, but few people realize that it had its origins in the heart of town – on Harav Kook Street. Prof. Aharon Shulov, a professor of zoology at the Hebrew University, initiated what he called an “animal corner” in 1940. It was actually created as a learning tool. Shulov wanted to focus on animals, birds and reptiles that are mentioned in the Bible and urged his students to collect them. It wasn’t easy because some of the creatures mentioned in the Bible are now extinct.Even so, the zoo continued to grow, much to the dismay of the neighbors who didn’t like the smell and were fearful that some of the more dangerous creatures might escape. So the zoo was moved from Harav Kook to Shmuel Hanavi Street, where it remained for six years before relocating to a plot of land on Mount Scopus that had been allocated by the Hebrew University. But in 1949, when Mount Scopus became inaccessible to Israelis, the zoo was moved to Romema, where it remained for just over 40 years. Though it had many visitors, it was nowhere near as spacious or as interesting as it is now.■ RUSSIAN MUSIC and cuisine will be the feature next week of the monthly folklore festivals that are held at Beit Avi Chai. The two-day Russian Culture festival on May 24 and 25 will include singer, composer and musician Arkadi Duchin, actor Sasha Demidov and film director Yonatan Haimovich, along with several immigrants from the former Soviet Union who have made their mark on Israel’s cultural landscape. In addition, there will be a vodka workshop, as well as a workshop on Eastern European Jewish culinary delights, with a special emphasis on cookies. There will also be a screening of Haimovich’s documentary Resisim, which deals with the absorption of elderly immigrants from the FSU. The film will be followed by a discussion.■ THE ANNUAL Bible Quiz, which is part of the traditional Israel Independence Day celebrations, was preceded a few days earlier by the Great Zionism Quiz that was conducted over a six-month period to find the most Zionist family and to test the Zionist knowledge of participating families. Families from more than 60 communities across Israel took part in the contest, the finals of which took place at Binyenei Ha’uma (The Jerusalem International Convention Center).The quiz, sponsored by the World Zionist Organization and the Zionist Council, was moderated by comedian Eli Yatzpan. Here, too, as in the Bible Quiz, the key question was posed by Prime Minister Benjamin Netanyahu.The Haimovich family of Ramat Hasharon, headed by 70-year-old Miriam Haimovich, won the title of The Most Zionist Family in Israel.As their prize, they won a trip abroad, tracing the footsteps of Zionist visionary Theodor Herzl across Europe until he came to the Land of Israel. Miriam said after the win that she always considered her family to be Zionist. All her children had served in high-ranking positions in the IDF, and had all been educated to love the state and the land.■ APROPOS THE Bible Quiz, Avshalom Kor, who for the first time in more than three decades was not its moderator, has been given a new role. Even though he is not a Jerusalemite, he has been appointed as a member of the committee that decides on names to be given to new Jerusalem streets. The appointment was made by Deputy Mayor Yael Antebi, who chairs the committee. She said that she wanted to have someone with an expertise in Hebrew vocabulary. Kor, who is noted for his knowledge of the Hebrew language, its history and its grammar, has hosted radio and television programs designed to improve the vocabulary of the public.