Rudolph Giuliani, who landed in Israel last weekend, stayed at the Dan Hotel in Tel Aviv but came to Jerusalem on Sunday for a gala dinner at the King David Hotel. 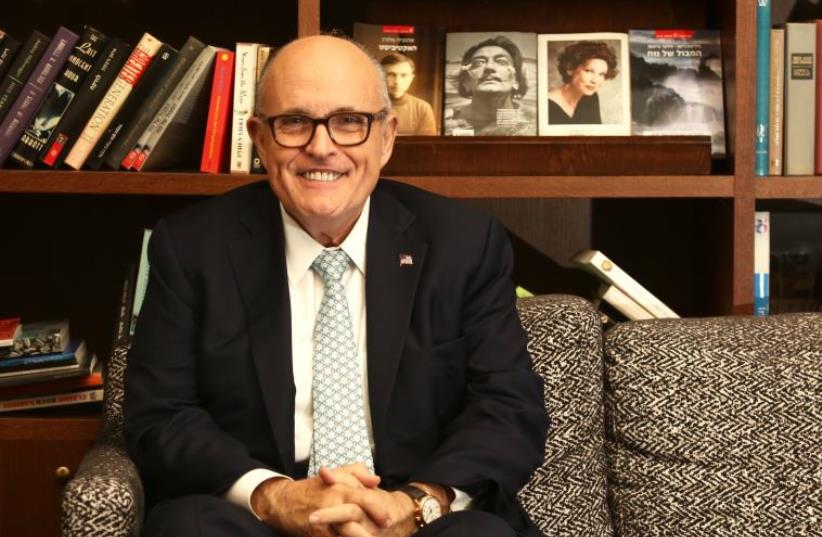 Rudolph Giuliani
(photo credit: MARC ISRAEL SELLEM)
Advertisement
■ FORMER NEW York City mayors are coming one after another to Jerusalem, Tel Aviv and points elsewhere in the country. Rudolph Giuliani, who landed in Israel last weekend, stayed at the Dan Hotel in Tel Aviv but came to Jerusalem on Sunday for a gala dinner at the King David Hotel co-hosted by the World Jewish Congress and the Greenberg Traurig law firm.Michael Bloomberg, who succeeded Giuliani in the post, was in the capital in mid-2014 to become the first recipient of the Genesis Prize, and two months later defied an FAA ban on flights by American airline companies to Israel and arrived on El Al to prove that it was perfectly safe to come here.At the King David dinner, Mayor Nir Barkat said, “I started with security software in 1988 and became mayor, and Rudy Giuliani started as mayor and went into security software. I know what you’re getting into,” he told Giuliani as he recalled how much effort he had put into convincing clients that they needed firewalls. “Our best customers were always in New York,“ said Barkat, adding that after Jerusalem, New York was his favorite city and that he had been there on a business meeting on 9/11 when the Twin Towers suffered a terrorist attack.■ INTERIOR MINISTER Arye Deri and Jerusalem Mayor Nir Barkat participated in a joint ribbon-cutting ceremony last week in Homat Shmuel (Har Homa). A branch of the ministry’s population and migration registration that formerly operated on an interim basis in Gilo has been closed and a new branch opened in Homat Shmuel, where the population is growing rapidly. The Har Homa branch, located on Eliahu Koren Street, provides full Interior Ministry services such as passport renewal, new smart hologram passports, ID cards, visa extensions, issue of birth and death certificates and changes of address. The new branch will be a boon to residents living in the southern part of the city, as well as those living in Gush Etzion.■ GOOD NEWS for residents of the Romema neighborhood and surrounds who are members of the Maccabi Health Services. A modern and medically advanced Maccabi clinic is due to open in Romema next week. The new medical center, which is one of several new centers designed to improve medical services in Jerusalem, will be headed by Tal Bar-Orion. Maccabi, which is community oriented, has set itself the goal of helping the communities in which its branches are located to be healthy and stay that way.■ PURIM IS becoming a bigger deal each year in and around Rehavia thanks to the efforts of Rabbi Yisroel Goldberg, the director of Chabad of Rehavia. Six years ago, he introduced Aza Zaza, which gave people who had missed a Purim megila reading the opportunity to catch up either at the Chabad Center at 8 Ramban Street or at several eateries in and around Aza Street. This year, the staggered megila readings have been extended to include restaurants and coffee shops in Nahlaot.On Thursday night, March 24, Chabad of Rehavia will have a megila reading in the basement of the Great Synagogue on King George Avenue at 6:30 p.m.and then at 8 Ramban Street every hour on the hour from 8 to 11 p.m. and also at Yeshivat Tiferet Menahem, 29 Yitzhak Barashi Street in Nahlaot.On Friday March 25, readings will be held from 7:30 a.m. to 2 p.m. beginning simultaneously at Chabad Rehavia and Tiferet Menahem.After that, there will be readings at 8 a.m. at Shosh Café, 31 Keren Kayemet; 9 a.m. at Café de Paris at 1 Ben-Maimon; Meyuhas Restaurant at 11 Keren Kayemet; Pinukit at 6 Narkis; Trumpeldor at 7 Bezalel; and the Chabad Center, every hour from 9 a.m. to 3 p.m.At 10 a.m. there will be readings at Zigmund Restaurant at 29 Aza; Au Delis at 22 Keren Kayemet; and Hahummus shel Tehina at 2 Yitzhak Barashi.11 a.m. at Bein Aza LeBerlin at 1 Harav Berlin; Tommy’s Burger at 21 Keren Kayemet; and Gezer Square corner Gezer and Eilat streets.Noon at Sushi Rehavia at 33 Aza; Glidaria Katzefet at 19 Keren Kayemet; at the Park on Beersheba Street in Nahlaot; and Gvina & Agvania at 52 King George.1 p.m. at K2 Pizza at 19 Aza; Maestro Pizza at 25 Keren Kayemet; and the Gerard Behar Center courtyard at 11 Bezalel.2 p.m. at Angel’s Bakery at 26 Keren Kayemet and Park On at 16 Einayim Le’mishpat in Nahlaot.That takes a great deal of organizing, and it’s really interesting to see how the number of venues increases from year to year not only for the sake of the mitzva but also because proprietors of coffee shops and restaurants realize that many of those attending will be in their premises for the first time and may be sufficiently impressed to return at a later stage. It’s one of the proofs that Judaism can be good for business.