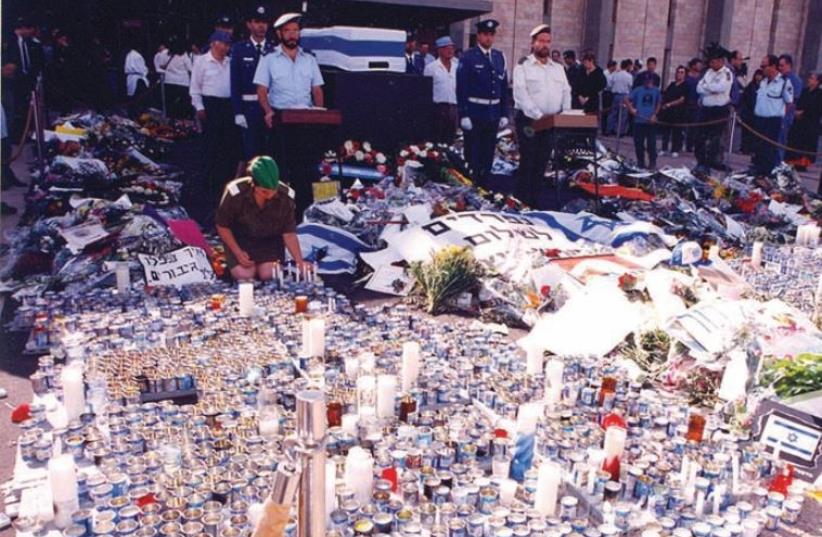 A soldier organizes memorial candles in front of Yitzhak Rabin’s casket, at the Knesset in November 1995
(photo credit: ISAAC HARARI)
Advertisement
■ THIS COMING Saturday night, the central public commemor a t ion marking the 20th anniversary of prime minister Yitzhak Rabin’s assassination will be held in Tel Aviv’s Rabin Square. The turnout is expected to be bigger than ever, due to the presence of former US president Bill Clinton, whose “Shalom, haver” eulogy at Rabin’s funeral went straight to the heart of the nation.One cannot help but feel sorry for the people who live in the immediate vicinity of Rabin Square, and are victims of the frequency of demonstrations, marathons, night runs, etc., that force closure of the streets in the area. While one can understand why, for historic reasons, the Rabin commemoration must be held in Rabin Square, there is no valid reason for events to be held there when Tel Aviv has numerous other venues, such as Hayarkon Park or the port, at which to hold mega-gatherings.■ ASHDOD MAYOR Yehiel Lasri; former MK and minister Ofir Pines-Paz, head of the Institute of Local Authorities at Tel Aviv University; and Tzahi Abu, chairman of the Federation of Cities for Quality of the Environment, will be the opening speakers at the third annual International Ashdod Conference for Sustainability, whose theme this year is “A Window on the Mediterranean: Linking the Sea, the Coast and the City.” Ashdod happens to be an example of this linkage.Participants will include government ministers, senior officials, mayors, representatives of environmental organizations and academics. Among the issues to be discussed are: to whom the beach belongs; where construction should begin on the beach; how populations can stay safe from tsunamis; and how to generate energy from waves. The conference will be held on Monday, November 9, at the Ashdod Performing Arts Center.■ THERE IS a general consensus throughout the country that it is essential in these violent times that people learn how to protect themselves. The art of self-defense is no longer an exercise or a hobby but a potential means of saving one’s life.At the initiative of Or Veyeshua, the hesder yeshiva in Haifa, Israel karate champion Eyal Yehuda came to the city’s Naveh Sha’anan neighborhood to teach residents what to do if attacked by a knife-wielding terrorist. This has become a national mission, said yeshiva CEO Yishai Burtzhak: “It is essential that the public be trained in how to defend itself from terrorists.”■ AUSTRALIAN AMBASSADOR Dave Sharma will be getting out of bed extra early this morning to head for Beersheba for the annual ceremony commemorating the Battle of Beersheba in which Australian and New Zealand Light Horse troops played an integral part in the victory over Ottoman forces.In view of the fact that most people attending the ceremony are coming from other parts of the country, it is being held very early in the morning so that those who are religiously observant can get home for Shabbat with a little time to spare. The ceremony is also being held a day early, because the actual commemoration date, which is October 31, falls on a Saturday.Plans for the centenary of the battle, in 2017, are already in the pipeline, and will to some extent be held in conjunction with events marking the centenary of the Balfour Declaration.