GENERALLY SPEAKING, when publicity is given to any of the hotels in the Dan chain, it’s because some VIP is staying in one of them. 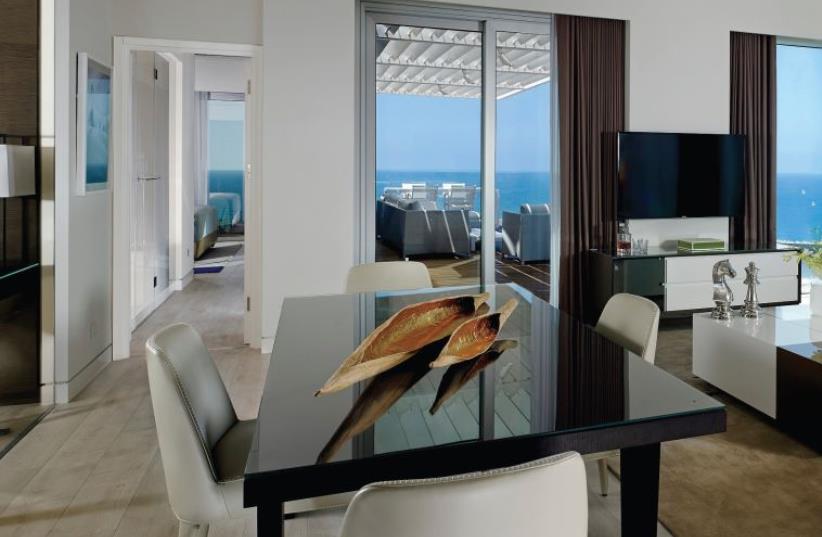 The Ritz-Carlton Hotel, Herzliya
(photo credit: MATHEW SHAW)
Advertisement
■ VISITORS TO the Ritz Carlton Hotel Herzliya are somewhat surprised when they see the new general manager, whose appointment was announced in May of this year. When Guy Klaiman took over from Ned Capeleris, he found himself confronted with mixed reviews of the luxury facility at the Herzliya Marina. Some people wrote glowing reports about their stay, but others said they wouldn’t come back and listed the reasons why. To his credit, Klaiman left these complaints online, but also included his letters of apology and his invitation to come back and enjoy better conditions.Even though the Ritz Carlton is a relatively new hotel, its presence signifies a kind of homecoming for Klaiman who was associated with Hilton International for some 30 years after having trained at Hilton hotels in Israel. Klaiman grew up in Herzliya, but when he returned to Israel after a long stint abroad, it was not to Herzliya, but to Jerusalem where he was the first general manager of the Waldorf Astoria, wading through literally hundreds of staff applications and training the initial staff. Klaiman set the standards for the Jerusalem Waldorf, which is one of the reasons that he was selected to manage the Ritz Carlton.During his army service, he had been a paramedic and an ambulance driver. His father was a doctor and it was assumed that the younger Klaiman would eventually follow in his father’s footsteps. All that changed due to his older brother who was working in the hotel industry and who had a job at the Laromme Hotel in Jerusalem. The Laromme is now the Inbal.Hotels had a much more glamorous aura than hospitals, so Guy Klaiman opted for hotels – and that’s what he’s been doing ever since.At the Waldorf there was a joke about the “C view,” which in fact is an Arab cemetery across the road. Unwitting guests hearing this expression thought it meant “sea view,” and were puzzled as there is no sea around Jerusalem. But in Herzliya, Klaiman has a sea view every day.■ GENERALLY SPEAKING, when publicity is given to any of the hotels in the Dan chain, it’s because some VIP is staying in one of them. This time, the VIP is the winner of the chain’s incentive for superior service.Aviv Shor, 28, a front-desk reception clerk at the Dan Panorama Hotel in Haifa, was one of 33 finalists for the grand prize, a Skoda Citigo car. Dan Hotels chairman Mickey Federmann and the chain’s general manager Rafi Sadeh presented Shor with the keys to the car at a festive dinner attended by all the finalists.Shor was singled out for the exemplary assistance he gave to a group of Chinese tourists, one of whose members took ill. Shor secured the urgent services of a physician who prescribed medicine that would benefit the patient, after which Shor himself went to get the prescription filled and delivered it to the ailing guest. His personal involvement on behalf of a stranger in the country was considered to be service at the highest level. Sadeh said that the chain has always regarded service as a supreme value, and was always looking for ways in which to improve it. Shor exemplified the chain’s No. 1 priority, he said.Approximately a year and a half ago, the chain, as part of its strategic vision for improving service, decided that the best course of action was a valuable incentive – and it obviously worked.■ THE GUILFORD GLAZER Faculty of Business and Management at Ben- Gurion University of the Negev was ranked 42nd in the world in the subject of Hospitality and Tourism Management on ShanghaiRanking’s Global Ranking of Academic Subjects for 2017. It is the only Israeli faculty to make it into the ranking for hospitality and tourism management. The faculty was also ranked 201 of 300 in the subject of management.Since its founding in 1994, the Department of Hotel and Tourism Management has been an integral part of the Guilford Glazer Faculty of Business and Management, as opposed to other Israeli universities where the research and teaching on the subject is scattered across faculties. The department offers an undergraduate degree in Hotel and Tourism Management and a Masters in Tourism and Hotel Management.Guilford Glazer Faculty of Business and Management Dean Prof. Oded Lowengart, incumbent of the Ernest Scheller Jr. Chair in Innovative Management, commented, “The faculty’s spots in the Shanghai ranking are testimony to the quality of our research. To better understand the significance, the GGFBM is the youngest and smallest management faculty in Israel, so this standing is evidence of highly productive, high-quality research and academic achievement. An analysis of the criteria for ranking shows that the faculty’s success lies in factors like the quality of the journals in which its studies are published and its international collaborations.”